Less common species of bumblebee found in the UK, 2, 1 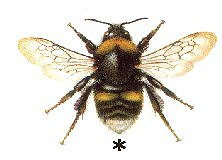 Bombus soroeensis, the Broken-belted bumblebee prefers heathlands and uplands in the Hebrides, and calcareous grassland in southern England. In Scotland it can be seen high on the hills at 700 m or above. It is more frequent in Scotland, and declining in the south, not recorded in Ireland. Favourite flowers include white dead nettle, clovers, bramble, comfrey, heather, scabious, knapweed. In Scotland queens fly from June, workers from July, and males and new queens in September. All castes can be seen as late as October in good years. Nests underground in old mammal burrows. Successful nests can have up to 150 workers. Note the break in the yellow band on the abdomen (queen and worker, above left). The male (above right) has a thin line of ginger hairs between the white of the tail and black of the abdomen. 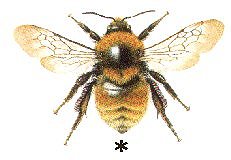 Bombus distinguendus the Great yellow bumblebee is restricted to coastal sites in Northern Scotland mainly on cliffs and sand dunes. Nests just below or on the ground surface. In the UK this species is listed as nationally scarce. In the U. K. queens fly from late May, workers from late June, and males and new queens in August. 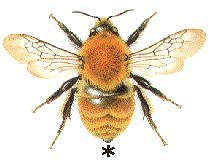 Bombus muscorum, the Moss-carder bumblebee is uncommon, prefers moorland, fen and salt marshes. Tends to prefer damp locations. No black hairs on abdomen. It has short, dense very ginger hairs on the thorax, and slightly paler on the rest of the body. Workers and males have the same hair colour as the queen, but slightly longer. Population has declined, and it is now very rare and found on a few Hebridean islands.The preferred nest site is on or just below the ground. Nests are smallish with 40 - 120 workers. This bumblebee is said to be aggressive in defending its nest. Favourite flowers include clovers, vetches, thistles, teasel, bird's-foot trefoil, brambles and heathers. Workers and queens can often be seen foraging in really bad weather. 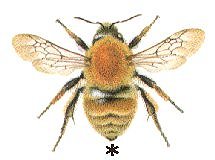 Bombus humilis, the Brown-banded carder bumblebee is restricted to southern England coastal and chalkland areas, coastal heaths, and flower-rich brownfield sites, but widespread in Europe, and also found in southern Scandanavia and central Asia. Unfortunately this bumblebee is in decline throughout its distribution. Favourite flowers include vetches, clovers, dead nettle, honeysuckle, roses, thistles and teasel. It looks very similar to Bombus muscorum (above), no black hairs on abdomen. The UK status of this bumblebee is local. Queens are seen from May, workers and males from early June or even late May. There may be two generations in some places as workers and males can be seen right up until late September during good summers and in places where the foraging is good. The preferred nest site is on or just below ground and is small containing no more than 40 - 50 workers. The cuckoo bumblebee Bombus campestris invades its nest in other countries, and may do so in the U. K. too. 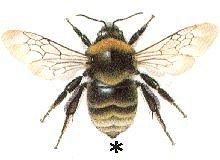 Bombus subterraneus the Short-haired bumblebee was declared extinct in 2000. Rare, restricted to S. England on flower-rich heathland and grassland, however it flourishes in New Zealand where it was introduced in 1885, and is now found on the shingle margins of large lakes. Queen and workers above left, males above right. Nests below the surface. There were plans to re-introduce this species into Kent in England from New Zealand. This did not work out, but it was introduced from queens taken over from Scandinavia in 2012. The Scandinavian individuals are sometimes very black, with just a few white or yellow hairs marking where the bands of colour would be. Queens fly from May, and favourite flowers include dead nettle, red clover, honeysuckle, teasel, bramble, comfrey and viper's-bugloss. The nests are underground and at the peak have 75 - 100 workers.

Bombus magnus workers and queens resemble Bombus lucorum (above), but with a broader and longer band of yellow on the thorax. The yellow band on the abdomen can be paler or even cream coloured. This species is found in moorland, heathland and woods on higher ground, often above 600 m in Scotland. Also, in the north it can be found on coastal grassland.

Queen forewing length 17 mm. There do not seem to be small, early workers. All workers are fairly large. Queens appear from April. Bombus bohemicus is its cuckoo species.