Bombus terrestris is our largest bumblebee, and usually the first to emerge. The thing to note on the queen is the dirty orange colour of the hairs at the end of the abdomen (below), although on continental Europe and in the Channel Islands the tail of the queen is white. Also when Bombus terrestris and B. lucorum can be seen together the yellow hairs of B. terrestris appear more orangey while those of B. lucorum are more lemon yellow. Some queens can have the first yellow band reduced or even missing altogether. There are melanic forms of workers, queens and males where the abdominal yellow bands are reduced or even missing making the bee look very dark. This is often accentuated if the bee is covered in dark pollen.

Queens fly from February, workers from April, and males and new queens can be seen as early as late May. In the south two generations a year are more and more common, with the second generation foraging as late as October. There have even been reports of three generations a year. Pretty soon this hardy species will forage year round in favourable years in the south as long as there are flowers supplying pollen and nectar. Favourite flowers include sallows, cherries, gorse, spring bulbs, thistles, knapweed, bramble, teasel, buddleia, ivy and scabious.

Workers (below) have a white tail, and are almost indistinguishable from Bombus lucorum workers.

Lengths, queen 20-22, worker 11-17, male 14-16. Forewing lengths queen 18 mm, worker 13 mm, male 14 mm. Bombus terrestris is one of the main species used in greenhouse pollination, and consequently can be found in many countries and areas where it is not native; Tasmania for example.

Slightly smaller than Bombus terrestris, and with a white tip to her abdomen. Body length, queen (below) 19-20 mm, forewing 16 mm. Queens can be seen from early March. New queens can appear as early as May. 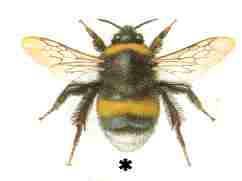 Populations are believed to be declining. Favourite flowers include sallows, cherries (for queens early in the year), thistle, knapweed, bramble, teasel. They are also accomplished nectar robbers of comfrey and honeysuckle.

Differences between queens of Bombus terrestris and B. lucorum

The workers of both species look like smaller versions of the lucorum queen. See the worker above. They are almost impossible to tell apart without dissection. The size range can vary quite a lot, but usually the smaller workers are from the earliest laid eggs. Bombus lucorum workers weight range from 0.04 - 0.32 g and the queens from 0.46 - 0.70 g; B. terrestris workers range from 0.05 g - 0.40 g.

The males have a many more yellow hairs (see the photograph near the bottom of the page and above), and a distinctive yellow nose. The first yellow band may be longer, and the tail ranges from white to buff in B. terrestris males. Of course they do not usually emerge until about August.

Both of these species make their nests in the ground, usually in old mouse or vole nests, and in the U. K. preferably facing south to keep the nest warm, though B. terrestris tends to prefer shadier sites.

Generally the nests of B. terrestris have a deeper and longer tunnel that those of B. lucorum. Tunnels of 2 metres long have been recorded. A favourite nesting site of B. terrestris is under garden sheds. Successful nests can have as many as 500 workers. Lucorum nests tend to be smaller with about 200 workers at the height of season.

In the early days of the nest it is estimated that a Bombus terrestris queen may have to visit as many as 6000 flowers per day in order to get enough nectar to maintain the heat needed to brood her eggs (for more about this most difficult time in a queen's life see the lifecycle pages). And during every foraging trip the brood will cool down, so the trips should be short. This is why it is vital that the nest is located close to rewarding flowers.

The queen secretes a pheromone, which, if present within the first 5 days of larval life determines that the larva will develop into a worker. If the pheromone is absent, and if the larva receives sufficient food (more than a larva destined to be a worker) during her final instar, she will develop into a queen. Consequently a queen larva is larger than a worker larva. It is believed that caste determination works in a similar way for other bumblebee species too.

The photograph below shows the pollen basket of a Bombus terrestris queen - it is the yellow blob on her leg.

Below the basket is shiny and empty, while above it is partly filled with yellow pollen. 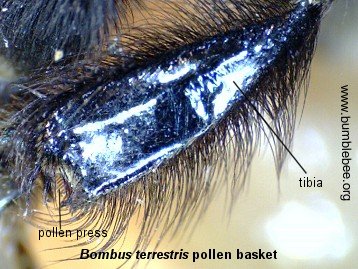 The pollen basket is the modified tibia of the hind leg. The inside leg is covered with hairs to rub pollen off the body. This is then passed to the pollen press, which is formed by a comb on the tibia, and the press or auricle on the metatarsus. The levering action of these two press the pollen, and it is pushed up onto the shiny, flat or convex tibia. The surrounding hairs are stiff and hold the pollen safely until the bee reaches the nest.

Both species have comparatively short tongues for bumblebees, so they tend to forage on flowers with short corollas and daisy-type flowers. However they are accomplished nectar robbers.

Bombus terrestris and B. lucorum males patrol mating circuits laying down a pheromone to attract new queens. The pheromone is used to scent-mark prominent objects (tree trunks, rocks, posts, etc) on the circuit. The circuit is marked in the morning, and after rain. The scent of some species can be detected by some humans. Usually they patrol at species specific heights. Bombus terrestris and lucorum males patrol at tree-top height. However this depends on the habitat.

The Bombus lucorum male below was found dead in July. The tip of one of his antennae is missing, but apart from that and some disarray to his wings, he was intact.