The yearly life cycle of the bumblebee colony

This page, and the pages linked from it show the yearly lifecycle of a bumblebee colony. You can either follow the lifecycle in chronological order by looking at all of the pages in turn, or you can skip to whatever part you are interested in by clicking the links below.

Stage 1, the queen emerges from hibernation and starts new colony by herself.

Stage 2, workers (females) are produced and start to forage; the colony develops and grows.

The start of the colony.

Bumblebee colonies have a yearly cycle, except for some tropical bumblebees where the year-round availability of flowers allows colonies to survive for more than one year, and some Bombus terrestris nests in New Zealand (where the bees were introduced from the 1890s).

Queens that have mated in late summer hibernate, usually in the soil, and emerge the following spring. Bombus terrestris is usually the first species to emerge in northern Europe. In the north east of Scotland the first queens are usually sighted in late March or early April depending on weather conditions.

These queens haven't eaten anything since the previous summer, so they are hungry. This is why it is vitally important that they find early flowers to feed. Newly emerged queens eat both nectar and pollen, and it is the pollen that helps her ovaries develop.

A bumblebee cannot fly unless her flight muscles are at 30 oC, so she has to brave the cold weather to feed or else she will sink into torpor and never wake up. She continues feeding and sheltering at night near the food plants in nooks and crannies for a few weeks until her body signals her that it is time to find a nest site.

The image below is a summary of the yearly lifecycle of a bumblebee colony, and was taken from the book Bumblebees by Prys-Jones and Corbet. 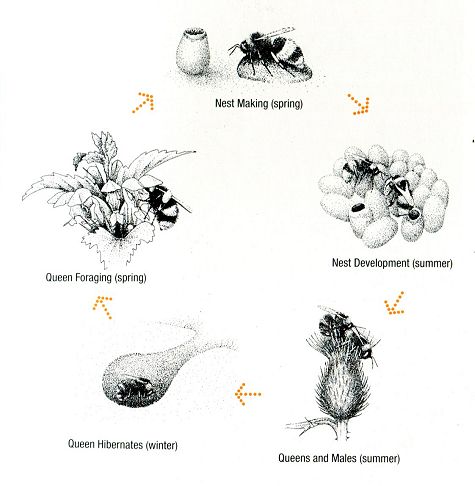 The queens found the new colony themselves.

The queen starts nest searching once her ovaries have plumped up. Deserted small rodent nests, dead, tussocky grass, and the base of untidy hedges are popular sites. Each species has its own nesting preferences, and more about these can be found on the individual species pages. It is unfortunate that tidy gardeners often destroy what a queen would regard as a highly desirable residence.

It is at this time that you most commonly find bumblebees straying into your house and behaving strangely. They are nest searching queens and they will investigate any dark corner, flying slowly and sometimes even disappearing down holes, or even into pockets. They seem oblivious to their surroundings, and not at all interested in flowers. These are queens looking for a safe site to begin the colony.

Once a queen has found a suitable site she builds a wax honey pot and fills it with regurgitated nectar (honey). The wax for the honey pot is exuded from between the segments of the abdomen. The queen also builds up a store of pollen, some of this she eats, and the rest she forms into a ball moistening it with nectar and saliva, this is sometimes called "bee bread". It is believed that the saliva provides some protection against spoiling by fungi and bacteria. This store of pollen and nectar will enable the queen to survive a day or two of bad weather without foraging. So any queen found carrying pollen in her pollen baskets has already found a suitable nest site.

The queen broods the eggs.

The pollen stimulates the ovaries to produce eggs, which the queen lays in batches of 4 -16 on the ball of pollen, this is then covered with wax. The eggs are pearly white and slightly curved like a sausage, and are about 2.5 - 4.0 mm long.

The ball of pollen with the eggs is placed within reach of the honey pot; this enables the queen to brood the eggs and drink honey at the same time (see the drawing above of a queen brooding eggs). Like birds queen bumblebees brood their eggs to keep them warm. Bumblebees are very hairy, but the underside of the abdomen has a bare patch, and so the heat from the queen's body can pass directly to the clump of wax-covered eggs. During this stage the queen rarely leaves the eggs for long and she keeps them at about 30 oC (see temperature regulation). So you see it is not really correct to say that the bumblebee is cold blooded. If the temperature does fall below 30 oC the larvae's growth will be stunted.

After about 4 days the eggs hatch. In the early days of the nest it is estimated that a Bombus terrestris queen may have to visit as many as 6000 flowers per day in order to get enough nectar to maintain the heat needed to brood her eggs. And during every foraging trip the brood will cool down, so the trips should be short. This is why it is vital that the nest is located close to rewarding flowers.

The grubs feed and grow

After this stage the various species differ slightly in the way the larvae are fed, but in all cases their main food is pollen. The larvae grow and pupate then emerge as adults. The larva usually have 13 segments with a pair of spiracles (air holes) in each segment (see below). The antennae are nothing more than buds, they have no eyes or legs, and very limited powers of movement. They are eating machines. However though they eat and grow they do not defecate. They have what is known as a blind gut. This means the end of their gut is closed, so all the waste material remains inside the larva. Because of this the larval cell and food remain uncontaminated with waste. The waste is expelled just before the pupal stage, and stays in the cocoon. 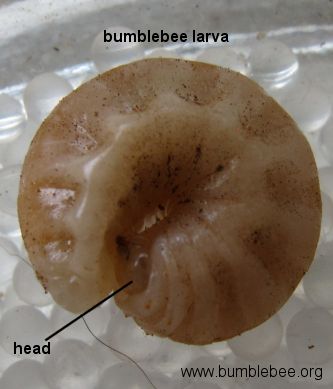 The cocoon is made from silk produced in glands near the mouth. The faeces is smeared on to the inside wall of the cocoon becoming part of its structure. The outer walls of pollen grains are very tough and not digested by the grub. So by examining the faeces in the cocoon the pollen husks can be identified to show which flower species the adult bumblebees have been foraging from. Bumblebees usually have 4 or 5 instars. An instar is the period between moults.

The queen usually lays another batch of eggs while the first batch is still in the larval stage. Bumblebee larvae are milky white and look a bit like maggots (see above). It takes 4 -5 weeks from egg to adult bumblebee. About half the time is spent as a larva feeding, then the rest of the time as a pupa in a cocoon.

Next, the bumblebee colony develops