Male eggs are laid and worker larva develop into queens

The bumblebee queen can lay two types of egg;

The queen lays unfertilised eggs only towards the end of the colony life. After she has laid male eggs she may lay fertilised eggs that will become queens, but she will not lay any more eggs that will develop into workers, so the laying of male eggs signals the start of the end of a colony. The pheromone instructing workers to raise the fertilized eggs as worker bumblebees is switched off once the queen starts to lay unfertilized (male) eggs, so that any fertilized eggs laid after this are raised as queens. Also once the pheromone is switched off the queen loses some of her dominance over the workers, and this leads some of them to lay unfertilized eggs of their own (see below).

Below a male spending the night under a teazle head. 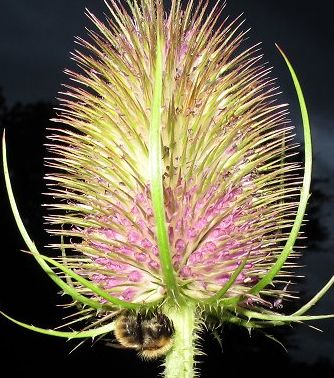 At about the same time as the queen starts laying unfertilised eggs that will produce males, the ovaries of some workers, usually those performing household duties, may develop. It is possible for workers (without mating) to lay unfertilised eggs that will develop into males, however workers cannot produce queens or other workers. Some workers try to lay eggs of their own, and may even attempt to eat eggs laid by the queen (eating their own sisters). This leads to aggression between worker and worker, and worker and queen. In many cases the more persistent workers will succeed in laying some eggs that will reach maturity. The queen will also attempt to eat worker -laid eggs (her own grandsons) and head butts and bites her daughters to try to maintain her dominance.

A recent study on Bombus terrestris showed that 10% of adult male bumblebees came from worker-laid eggs.

The photograph below shows a Bombus hortorum male who has spent the night inside a flower, and the one above shows a male resting under a flower head. 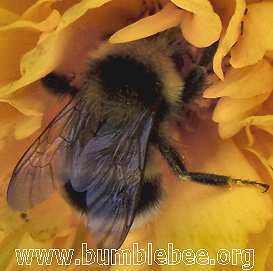 Males do not return to the nest once they have left it, so spend their nights either inside or hanging under flower heads. In the morning they are often very lethargic and may appear to be ill, but this is normal. They just need to get up heat by drinking nectar or being warmed by the sun or both.

The queen maintains dominance over her daughters by head butting and pulling the legs of the most aggressive workers, and it is believed that a pheromone which suppresses activity in the glands of the workers which would stimulate their ovaries to grow is also involved in maintaining the dominance of the queen.

The queen secretes a pheromone, which, if present within the first 5 days of larval life determines that the larva will develop into a worker. If the pheromone in absent, and if the larva receives sufficient food (more than a larva destined to be a worker) during her final instar she will develop into a queen. Consequently a queen larva is larger than a worker larva. It is believed that caste determination works in a similar way for other bumblebee species too.

Below is a Bombus lucorum male. In many species the male has a similar colour pattern to the workers, but has a greater abundance of yellow hairs.

The 4 stages in the life cycle of a bumblebee colony