Turbellaria include the only free-living Platyhelminthes, they are mainly aquatic, but there are a few terrestrial species inhabiting moist environments. A small number of terrestrial species have become pests where they have been unintentionally introduced in pot plants (see the New Zealand flatworm below). There are over 4000 species living on rock and sediments on water and in moist habitats on land, and they range in size from 1 mm - 50 cm. In the U. K. there are 76 freshwater species.

Locomotion. They usually have ventral cilia, and this, along with mucous from gland cells forming a trail, is their means of locomotion. The larger species also rely on muscular contractions, and ventral cilia may be absent in these species.

The mouth is usually located on the underside of the body, part of the way back from the front edge (see below), and can face forwards or backwards depending on the body type. 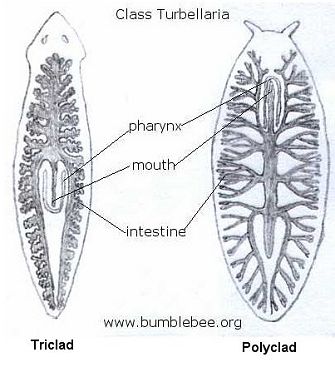 Eyes or light-sensitive eye spots are fairly common and are located at the head end. Some have statocysts for equilibrium.

Reproduction. Turbellarians can reproduce asexually by fission, and whole animals can regenerate from a small piece, with the original piece retaining polarity.

There are two basic body types as shown in the drawing above, on the left - Triclads and Polyclads on the right.

Triclads, on the left in the drawing above, have 3 main branches to the gut: 1 pointing forwards, and 2 pointing backwards. They include the freshwater planarians. Planarians are mostly carnivorous, and feed on Crustacea, Nematoda, Rotifera and Insecta. Freshwater triclads often rest on the undersides of stones, leaves or among mosses. They are sometimes mistaken for leeches. They can also travel upside down along the surface of water, their weight being supported by surface tension. In pale coloured species they will appear to be the colour of what they have most recently eaten. They lay their eggs in cocoons attached to stones or water plants.

It ranges in length from 5 - 170 mm. The ventral surface is cream coloured and the dorsal surface is dark brown with a cream margin, however very young flatworms are pale-coloured and darken as they age. Their habitat is the soil under stones and other surfaces. The egg capsule is 8 mm long and shiny red to black. Each capsule contains several young.

In the U. K. this is an invasive species which lives entirely on earthworms. Its predation on earthworms leads to soil degradation, and it has few predators in the U. K. It was first recorded here in 1963 in Belfast, and it is believed to have arrived and spread in pot plants.

Dendrocoelom lacteum (above) is one of the commonest freshwater triclads in the UK. It is white and its gut is clearly visible through the body wall. It has 2 eyes and can reach 2.5 cm long and 0.5 cm wide. Its cocoons are spherical and contain 5 - 42 young. It can breed throughout the year, and is found in streams and still water.

Polycelis nigra, above, is a triclad around 8 - 15 mm long, black and has at least 10 eyes arranged around the margin of the head end. Although the eyes are black and difficult to see. It is commonly found on stream bottoms, lake shores and ponds.

Polystomum sp. (above) is a parasite of tadpoles and frogs. Note the suckers at either end of its body.

Polyclads, below and in the drawing at the top of the page, have a forward facing mouth and their intestine branches more. They are mainly marine.