Tardigrades are commonly known as water bears. There are just over 1000 living species; around 50 are known in the UK, mainly terrestrial, and they range in length from 0.05 - 1.2 mm (no bigger than the dot over this i).

Tardigrades show similarities to the Rotifers, e.g., cryptobiosis; but they are usually placed as an offshoot of the Annelid -Arthropod line, and some say they are related to the Onychophora.

The legs end in 4 - 8 claws. The structure of the claws can be used in identification, so a microscope of high power is needed.

They have a muscular pharynx (see below) which allows them to suck up plant juices.

Above is Microbiotus sp. It has a clear to pinkish cuticle, and is up to 1 mm long.

They are mainly found in the water films surrounding algae, mosses, lichens and sand grains. These are all non-permanent habitats, and to survive the Tardigrades have evolved resistant stages. They can allow their body water content to fall from 85% to just 3%, and can withstand temperatures well below freezing and above boiling. Macrobiotus huflandi can survive after being immersed in liquid helium- a temperature of -271oC! They can survive in the vacuum of outer space, and withstand extreme pressures similar to that found in the deepest oceans. It is thought that a damage suppressing protein that protects DNA from environmental stresses is responsible for much of this extreme survivability.

During the resistant stage they pull in their legs and curl into a ball. There are records of water bears on a dried museum specimen returning to life after being dried out for 120 years.

They are unable to swim, and move around by clinging to the surface of mosses etc. with their claws.

The cuticle is moulted about four times during the life cycle. Some species lay their eggs inside the moulted cuticle, into which males shed sperm. It appears that egg laying and defecation can only happen during moulting.

The eggs are also highly resistant to desiccation and temperature extremes. The eggs hatch into miniature adults.

They feed on plant or animal juices by piercing the cell or body wall with their stylets and sucking out the contents, though one species is known to be a parasite of sea cucumbers.

Below is Echiniscoides sigismundi, a marine species that grows to 0.2 mm long. 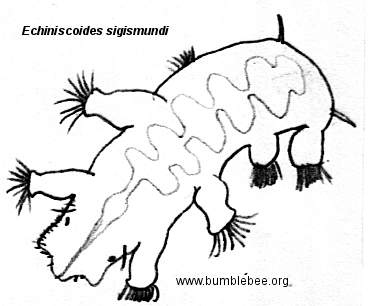