Above is Liposcelis sp. a typical indoor-type of book louse. The indoor species are usually wingless, or lack functional wings, have poorly developed eyes, and have broad hind legs. Although the shape of the hind legs makes it look like the insect can jump - it cannot, although it can run fast. They are usually cream, light grey or light brown. They live among dried materials, e.g. paper.

Book lice in books feed off the traces of mould on the paper and the glue that binds the book. Other species can be found in stored dry goods, and there are others which live in damp rooms feeding on the paste under damp wallpaper.

Many species are parthenogenic. All species can breed rapidly in the right conditions and with ample food, and there can be as many as 12 generations in a year.

The eggs are relatively large, being about 1/3 of the size of the adult. The total number of eggs laid per female can reach 200 if she is well-fed and healthy. They are sticky and are laid singly and stick firmly where they are laid.

There are usually around 4 nymphal stages before adulthood.

Life span and length of time before the egg hatches are largely dependant on temperature, but relative humidity of over 55% is also necessary.

Most species are omnivorous scavengers and do little damage. The species that invade books and museum specimens are the only ones that do any real damage. They are often found in new houses which have a high humidity until the plaster dries out.

Most species live outdoors and feed on pollen, algae and fungi. The outdoor species are often winged.

Below is Metylophorus nebulosus, one of the largest U. K. species. It is found outdoors in many places especially in conifers and fruit trees. It overwinters as an egg covered in debris. 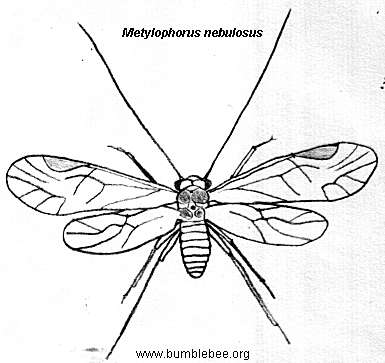