In the U. K. grasshoppers overwinter as eggs, with the larvae hatching in spring as the soil warms up, then reaching sexual maturity in June or July. Most U. K. species can be identified by the markings on the pronotum (shoulder). Ground hoppers, see below, are like mini grasshoppers. In the U. K. eggs hatch a few weeks after they have been laid, and overwinter as juveniles or adults, becoming dormant in cold weather.

Common green grasshopper, Omocestus viridulus, above is found throughout the U. K. and Ireland. It favours damp grassland, meadows and hillsides. This is the only grasshopper found in the higher moorland areas of the U. K. The cream-coloured lines on the shoulder curve gently inwards, and are used to identify this species from other, similar species. The green colouration can vary quite a lot, but the cream markings do not. It has long wings and when fully grown reaches a length of 1.5 - 2.5 cm. The female's wings are as long as her body, see above, and the male usually has wings a little longer. It eats grasses. Adults are seen from July to November. The photograph below shows a juvenile. The wings are not fully grown and appear as buds below the thorax.

The egg pod or case, below, is laid in grass. The young hatch out the following spring, and nymphs can be seen from late April.

The Common groundhopper, Tetrix undulata, above, has a body length of 6 - 14 mm, with the females being stouter and longer than males. The colouration varies from dark brown to an almost yellow/white and tends to match its surroundings. The one photographed above was covered in pollen from a nearby conifer. One of the most noticeable things about them is the prominent keel than runs down the body.

They are found throughout Europe except in the hot south and far north. They are widespread throughout the U. K., but are much less easy to spot than other grasshoppers. They prefer moist habitats, and in these places tend to be found in the drier, sunnier, bare patches. They can also be found in drier habitats, but in these they favour humid, cooler patches. They feed on moss, algae and lichen, and are nearly always found near moss. Adults can be seen throughout the year in warm weather. Eggs are laid in crevices in the ground, or in moss.

In colder areas the time taken from egg to mature adult can take two years. This grasshopper doesn't sing, and communication between adults is by visual signs.

Chorthippus brunneus, Field grasshopper, above, is one of the commonest grasshoppers in the U. K., although it is less common in northern Scotland. It is found in a wide range of grassy habitats, but prefers dry locations. The adults can vary in colour to camouflage themselves with their background. They are strong fliers and the wings can reach beyond the abdomen. Their song can be heard from June to November, and sometimes later in the south in warm years. The female lays her eggs in pods in the ground containing up to 14 eggs, and they hatch the following spring.

The Giant grasshopper, above, is found in Central and South America. Its wingspan can reach 26 cm., and in flight it is sometimes mistaken for a bird. The bright orange underwings can be flashed to startle predators and allow the insect a chance to escape.

Above is a beautiful tropical grasshopper in the Titanacris genus.

Below is a grasshopper head giving the names of the mouthparts etc. 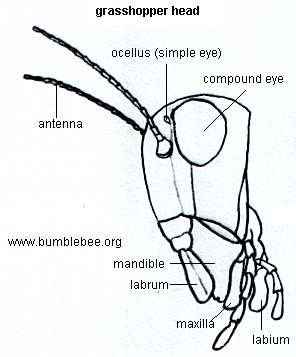