The nymphs (see the damselfly nymphs below) are aquatic, carnivorous and sluggish. They are slender, with 3 leaf-shaped tails, and are much better swimmers than the fatter dragonfly nymphs.

On hatching from the eggs the larvae start feeding at once. They have a prehensile lower lip (called the mask) which is folded under the head at rest (see the drawing of Agrion puella below). This has moveable teeth, and the whole thing can shoot out at great speed to grab prey. They tend to creep around the bottom of ponds and streams searching for prey. Dawn or dusk during fine weather are the most common times for moulting. There are usually 10 - 15 moults as nymphs. It can take nymphs from 1 to 5 years to mature depending on species. When a nymph is about to moult into an adult it crawls out of the water.

Damselfly adults are smaller and more delicate than dragonflies, and they have weaker flight. Though their flight is weaker than dragonflies they are pretty strong fliers and eat other insects, especially mosquitoes, black flies and other small flies, that they catch on the wing. They have a row of stiff bristles on either side of their legs, so the three pairs form a basket to scoop flying prey. However because of the positioning of the front legs Odonata cannot walk or crawl. Damselfly flight speed has been recorded as 1.5 metres per second and 16 wing beats per second. Compare this with other insects.

Females and males of the same species are often different colours, and younger adults are usually a paler colour than older ones. The beautiful colours of the adults fade after death. The venation of the wings is used in identification to species level, however there is disagreement between entomologists in naming the veins, so identification for a beginner is usually easiest using illustrations.

Before mating the male must transfer sperm from the genital opening on segment 9 to the reproductive organs on segments and 3. Then on finding a female he grabs her by the neck with his claspers. She curves her body around until the tip of her abdomen touches his reproductive organs in segment 2 and 3 to collect the sperm. This is known as the copulation wheel. After mating the pair may fly in tandem with the male leading. Females mate with more than one male and store the sperm from the matings, although she tends to use the sperm from the last mating. The male mating organ contains a structure that allows him to scrape or push aside the sperm from previous matings before depositing his own in the most favourable spot. The length of time he holds on to the female (the copulation wheel) will also prevent her mating with another.

The female places her eggs in the water, usually on the stems of aquatic plants. Some species actually crawl underwater to place their eggs deeper, some have a saw-like structure on the ovipositor to make slits in plants enabling them to place the egg inside the stem, and others just skim over the water dipping the tip of their abdomen in and scattering the eggs singly. In some species the male holds on to the female while she lays eggs. Adult life span can be as long as 2 months, but is usually no more than 2 or 3 weeks. 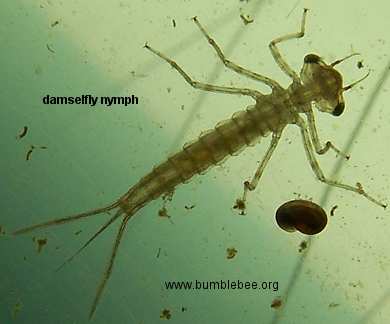 There are just 2 British species in this family. The adults are metallic green, and the nymphs prefer still waters. Above is a damselfly nymph, possibly Lestes sp. Note the leaf-like tail filaments and slim body. This one came as an egg in the stem of some plants I ordered for my pond. With the popularity of garden ponds increasing this may be a new method of dispersal.

Adult Lestes sp. fly from June until the first frosts.

Below is an Agrion puella nymph, with a more detailed drawing of the mask. All nymphs are carnivorous, and the larger ones will even catch tadpoles and small fish. 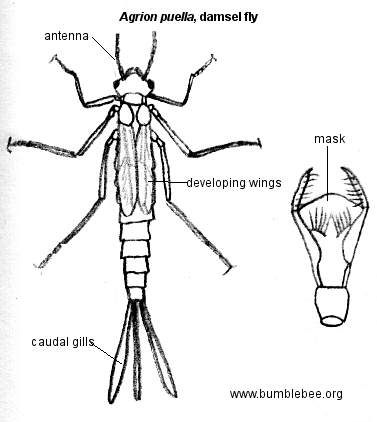 These are commonly known as the narrow-winged damselflies, and there are 13 British species. Their adult body length ranges from 25 - 50 mm, and they contain the largest number of species in Northern Europe. The adults are usually red and black or blue and black.

Above is Ischnura elegans, the Blue-tailed damselfly along with prey of what looks like a small caddisfly. Below is a short movie of Ischnura elegans manipulating the prey prior to eating it. This involved removing the legs and wings.

Ischnura elegans has a wingspan of 35 mm, a wing length of 14 - 20 mm, body length of around 31 mm, with an abdominal length of 22 - 29 mm. The adults fly from the end of May until the beginning of September in the U. K. They tend to fly low among vegetation in or around ditches, canals, ponds and slow moving streams. They are fairly common throughout the U. K. And are one of the few from this order whose nymphs can survive in slightly polluted water.

Above is Coenagrion puella, the Azure damselfly or Pond damselfly. Its wingspan is 41 mm and body length 33 mm. The adult flies from May to August. It is found near water meadows with lush grass, canals with abundant reeds, ditches and is one of the most common found in garden ponds. It is common in England and Ireland, but less common in Scotland. This one was just moulting into and adult. The female lays her eggs in the tissues of plants on the water surface.

Megaloprepus caerulatus, above is found in the rainforests of central and south America from Mexico south to Bolivia. It is the largest dragonfly alive today, and some males can have a wingspan of up to 19 cm, and an abdomen 10 cm long! Adult life span can be as long as 7 months.

The adult feeds mainly on orb web weaving spiders, plucking them from their web while being careful to avoid getting tangled up. To do this they hover in front of the web before plucking the spider off with its legs. Then the damselfly returns to its perch, removes the spider's legs, and eats the body.

The female lays her eggs in water-filled holes in trees. As such places are few and far between each one is guarded by a male who will fight off other males. And before allowing a female to lay he will mate with her to make sure it is his eggs he guards. The female may have already mated with a male, but as the end of the male penis is equipped with a scoop, he will scoop out any sperm before depositing his own. After laying her eggs the female flies off while the male hangs around to defend his waterhole. He will also allow other females to lay eggs if the hole is large enough.

The size of these holes varies from hold just about one litre of water to some that can hold about 50 litres. The larger the hole the more matings the male will get, and up to 13 have been recorded with as many as 250 eggs. Damselfly nymphs are fearsome predators and will eat almost anything they can get in their jaws so there is a lot of cannibalism in these small waterholes where the damselfly nymphs become the top predator. However the eggs do not hatch all at once, and hatching can be spread over a period of six months allowing a greater chance that at least one nymph will make it to adulthood. Other prey item that inhabit these waterholes and become the nymph's food include tadpoles, mosquitoes and other fly larvae such as syrphid and chironomids.