These are the millipedes (see the tropical millipede below), there are over 10,000 described species (62 species in Britain, 250 in France, 160 in Germany, 45 in Holland, 39 in Denmark), and perhaps as many as 70,000 undescribed. In the U. K. there can be 100 - 400 individuals in a m2 of grass and forest soil, and they play a significant role in the decomposition of the litter layer in soils, especially of forest soils. All are terrestrial. They can reach 28 cm in length (during the Carboniferous when oxygen levels were over 30% there were millipedes 100 cm long), and have fairly cylindrical bodies of between 25 and 100 segments. The antennae are short, the mandibles are strong, and they have 1 pair of maxillae fused together to form a lower lip. The body of millipedes is often specialized to enable the animal to roll into a ball (see the pill millipede below) or coil (see the tropical millipede below. They usually coil up when disturbed. 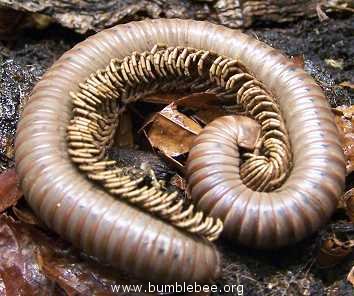 Unlike the Chilopods (centipedes), each body segment has two pairs of legs and two pairs of spiracles. No millipede has a thousand legs, the largest, from West Africa, barely reach 400. However a tiny millipede, Illacme plenipes, found in one single ravine in San Benito, California, and thought to have gone extinct until recently, has up to 750 legs in the female. She is only 3.2 cm long and 0.05 cm wide. The male has between 300 - 400 legs. Also, in the same genus Illacme tobini, also found in California, the males have 414 legs, 200 poison glands and 4 penises!

Not all millipedes have eyes, those that do usually have two groups of simple eyes (ocelli), again the number of ocelli that go to make up each eye increase with each moult until the full number for that species is reached. The ocelli in a mature millipede form a triangle.

Millipede larvae have only one pair of legs to each segment, and fewer segments than the adult form, see above. Usually they hatch with 4 fully developed segments and 3 pairs of legs between them. Behind this there are 1 - 3 other segments, then the final segment. At every moult the animal gains more legs as the number of leg-bearing body segments increases until it has the full compliment for that species.

The sexual organs of both sexes are on the second segment behind the head, just behind the second pair of legs. The male transfers the sperm to the female using gonopods - which as the name suggests are modified legs. These gonopods are often on the seventh segment. So to determine if an individual is a mature male, observe it closely as it walks. If it appears to have a pair of legs missing from the front end, then it is probably a mature male, because when the gonopods are not in use they are tucked away into a pouch. The female stores sperm in a spermatheca and fertilizes the eggs with sperm as they leave her body. She lays eggs in a nest.

Millipedes are mainly herbivorous or detrivorous. They can escape predation by rolling up or secreting toxic fluids from repugnatorial glands. They tend to prefer dark, moist habitats. Like earthworms they break down leaf litter and other organic debris, and are important contributors to improving soil structure. In colder climates millipedes don't hibernate in the winter or aestivate in the summer, nor are their eggs capable of undergoing a period of dormancy.

Most millipedes moult underground in a recess or chamber they have constructed. They usually lie in a spiral position during moulting, and they eat the moulted exoskeleton before they leave the chamber.

In the U. K. most millipedes lay their eggs in the spring or early summer. Some, but not all, species of millipede die after reproducing - this is termed semelparity. Some species of pill millipedes (see the drawing below) can live for as long as 11 years, some others live for as long as 7 years. In many species the males are smaller than the females and reach maturity in a shorter time.

Most millipede predators are vertebrates. in the U. K. starlings, blackbirds, toads, lizards and hedgehogs are the main predators.

Most live near the soil surface in the litter layer on which many of them feed. They will go deeper underground to moult, to lay eggs, and to avoid cold or drought. 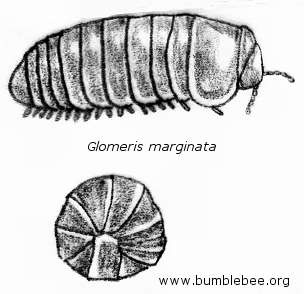 Above is Glomeris marginata, the pill millipede. It is often mistaken for a woodlouse, but it has more legs (17 or 19 pairs when fully grown) and a shinier body. When disturbed it can roll itself into a ball - hence its common name.

It tends to be found in calcareous, grassy soils, and in the leaf litter of deciduous forests - especially beech. It feeds on withered leaves. When fully grown it can be up to 2 cm long.

The female does not reach maturity until she is 3 years old, but a male is mature at 2. Females in the Glomeris genus surround their eggs with a sticky secretion exuded from the rectum, and mixed with soil particles.

The large tropical millipedes make popular and easy to care for pets, and surely few things on this planet are as elegant as the red-legged millipede out for a stroll.