There are more than 100,000 described species of Mollusc alive today and 35,000 fossil species, they range in size from just 2 mm to over 20 m in the giant squid, and occupy all major habitats.

They are believed to have originated in a Precambrian marine environment where they occupied the shore area offering them a great abundance and diversity of food and habitats. It is these varied conditions which probably led to their great diversity.

Later bivalves and gastropods moved from salt to brackish then fresh water habitats. And eventually some gastropods left the water and invaded the land, but were limited by their need for humidity and calcium.

Some molluscs have multiple pairs of organs, e.g. Monoplacophora, and so were thought to have evolved from a segmented ancestor making them closely related to the Annelids. This is no longer thought to be the case. It is now believed that the molluscan ancestor was probably more like a flatworm that developed some sort of protective calcareous covering over its dorsal surface. This covering would have limited respiration, and it is thought that the evolution of gills may have occurred at the same time. Two extinct phyla, Hyolitha and Wiwaxiida have protective coverings that may be similar to the ancestral molluscan shell.

The shell is usually formed of three distinct layers of different forms of calcium carbonate, from the outside the first layer is the periostracum, then a thick prismatic layer, and finally layers of nacre.

The mantle forms a skirt, and retractor muscles can pull the shell down over the foot when the animal is disturbed. The mantle cavity usually holds the gills or lungs, and the products from the digestive, excretory and reproductive systems are usually emptied into the mantle cavity.

The radula (above) is found in most molluscs. It is best seen when aquatic snails graze the algae of aquarium walls. 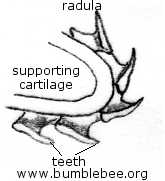 It is a moveable ribbon or strap on which there are backwardly pointing chitinous teeth, usually arranged in rows (see above ). There can be as many as 250,000 teeth.

The backwards and forwards movement of the radula rasps at the surface, breaking off food particles. As the teeth wear the ribbon is moved forwards, so there is a constant replacement of teeth.

The action of the radula is as follows -

This action is repeated rhythmically. The pattern and number of teeth in a row can be used in identification as they are different in each species.