Moths in the Sphingidae family 2, 1

For a general introduction to the Sphingidae (hawkmoth) family go the the main hawkmoth page.

In the 19th century botanists were mystified by the Madagascan orchid, Angraecum sesquipedale, as they couldn't see how it could be pollinated. They knew something was pollinating it, but what? You see the nectar was to be found only in the last 1 cm at the end of a narrow spur 20 - 30 cm long. Darwin was shown the flower. It is large and white, and the nectar is thick and fragrant. So this told him that in the thick jungle, the scent and the whiteness of the flower were probably the things that attracted the pollinator. Now white fragrant flowers the world over are often pollinated at night by moths. So Darwin predicted that a moth with a tongue (proboscis) of 30 cm or more was the elusive pollinator. At that time no such moth had been found, nor was one found in Darwin's life time. But 40 years after he had made his prediction such a moth was found, Xanthopan morgani subspecies praedicta, its tongue length is 30 - 35 cm, and it has been seen to pollinate the orchid. However another orchid, Angraecum longicalar has been discovered with a spur 40 cm long, and so far its pollinator has not been discovered. 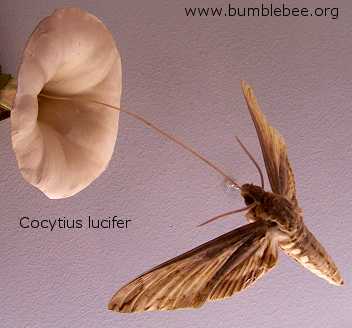 Above is Cocytius lucifer, a hawk moth found in Mexico and South America. From this preserved specimen you see that it has an extremely long proboscis. The adult wingspan is 14 - 16 cm, and it flies throughout the year. The females attract the males by releasing a pheromone from a gland at the tip of the abdomen. The caterpillars are green and white and hairless. They grow up to 11.8 cm long. 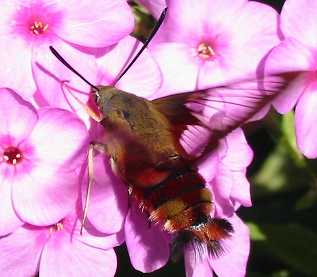 Above is Hemaris thysbe . Found all over the US. Adults are often mistaken for bumblebees. As you can see in the photograph the wings have large clear patches. Even when feeding the wings beat fast, so that they are almost a blur. They feed on lantana, honeysuckle, snowberry, lilac and thistles. The adults are day fliers, and the wingspan is 3.2 - 5.0 cm. The caterpillars feed on snowberry, honeysuckle and dogbane. They pupate in cocoons in leaf litter.

The narrow bordered bee hawk moth, Hemaris tityus above is a day flying bumblebee mimic. It really does resemble a bumblebee when it is hovering as it feeds from flowers, but its rapid, darting flight is not really like a bumblebee at all. When it first emerges as an adult its wings are loosely coated with grey scales, but these are soon lost in flight leaving the large transparent patches seen above. Fore wing length is 18 - 21 mm. In the U. K. it flies in May and June, when it is sunny and usually in the morning. It is found in bogs, fens and open places near wood where the caterpillar's foodplants grow. It is uncommon, but found over most of the U. K. and Europe.

The eggs are deposited singly under the leaves of the foodplant, devil's bit scabious and field scabious. The caterpillar feeds from June to August, and can reach 35 mm. It will drop to the ground if it is disturbed. It overwinters as a pupa on the ground or just below the surface, in a silk cocoon which is covered with earth and debris. There is one generation per year.

Eumorpha achemon, Achemon sphinx moth, above, Is found in woods, scrub and gardens in North America. It has a wingspan of 87 - 97 mm. Adults fly from June to August in the north, and have one generation a year. While in the south they fly from May to August and have two generations a year. The adults fly at night and feed on nectar from honeysuckle, petunia, philadelphus and phlox. The adult has a large pink patch (faded in this preserved specimen) on its underwing which it can flash to startle predators.

The female lays her eggs on the upper surface of leaves. The caterpillar's colour varies, and comes in three main forms; light green, orange and brown. After reaching full size the caterpillar descends to the soil to pupate and overwinter in the soil. The caterpillars can be pests in vineyards.