These figures are for the U. S. About $15 billion worth of crops every year rely on honeybees for pollination (2000 figures).

Two species of honeybee have been domesticated, Apis cerana from Asia, and Apis mellifera. Apis mellifera was antive to the Middle East, North-east Africa and Asia. "African or Killer honeybees" is just a strain of honeybee that is hypersensitive to the alarm pheromone released when a worker stings. This recruits more bees to attack than happens in other honeybee strains. These aggressive bees are not found in the U. K. or Ireland.

Honeybees come, originally, from the tropical countries, and have spread to the temperate zones of the world. They have managed to do this as they can survive the cold winters, even when temperatures plummet far below zero. In fact, when the outside temperature close to a honey bee hive has been recorded at -40C, the temperature close to the honey bee queen inside her hive has been recorded as 35C. So how does a tiny insect do this?

During the cold months the queen stops laying eggs. The workers, her daughters, stop gathering nectar as there are no flowers to gather it from. And from the outside the hive looks inactive. No much is going on on the inside either. The workers will have built up a good surplus of honey during the months of abundant flowers, and now, they drink this stored honey. It is full of energy. The workers huddle around their queen and feed her honey. Then they generate heat. They do this by shivering their flight muscles without moving their wings. And rather like Emperor penguin chicks in the Antarctic, the live ball of bees around the queen moves slowly. Those workers on the outside, who are the coldest, slowly move to the inside. Males have no use other than to mate, so do not survive the winter.

Many workers will die during the winter. But as the first flowers of spring emerge, and the temperature rises outside, the workers left alive will emerge from the hive to forage, and the queen will recommence her egg laying, and the life of the colony will continue for another year.

When the temperature is too hot. workers can cool down the hive by fanning air thought the entrances with their wings. And if this is not enough they will gather water in their honeystomach and spray this in the hive. The evaporation of the water will cool the hive. This same method of cooling is seen in bumblebees and social wasps.

On emergence as an adult the worker (all females and sisters) does a variety of jobs; usually this depends on age and experience.

Foraging range. Studies have shown that the normal foraging range of honeybees is 1 - 6 km., however in rare occurrences they have been known to forage as far as 20 km from the hive. Obviously this has implications for the spread of pollen from genetically modified crops. The photograph below shows a honey bee with full pollen baskets and completely covered in pollen from a poppy flower.

"Queen substance" is produced by glands in the queen's mandibles (jaw). As long as the queen is healthy this queen substance prevents the development of the workers' ovaries. Once the queen is old or dies the workers ovaries develop and they feed some larva enough royal jelly to produce new queens.

Queen substance is passed throughout the hive like all the other contact pheromones by the bees licking, grooming and feeding each other.

Below is the honeybee body which has the typical bee shape. The drawing shows the head of a honey bee showing the tongue. Honey bee size ranges from 12 - 20 mm long. Forewing length is 10 - 11 mm for queens, 9 - 10 for workers and 12 - 13 for males. Worker colouration can vary from almost black to orange and orange and black bands. The honeybee is not native to the USA, but was introduced by European settlers.

There are around 60,000 - 70,000 bees in the average hive. The queen and workers (all female), and drones (males) are produced when needed. For more on what a worker does and when.

Honeybee mating - out with a bang!

Usually just a few hundred drones are produced at a time. One or more drones fertilizes the queen during the single nuptial flight. The sperm from the drone is inserted into the queen explosively - the pop can actually be heard! The drone dies after this single mating because when the queen and the drone separate the drone's genitalia (along with some abdominal contents) are hauled out and remain in the queen.

The queen can mate more than once, however. The next male to mate with her will just scrape out the genitalia of the previous male as he mates with the same fatal, explosive end. The matings continue until the queen judges she has a sufficient store of sperm in her spermatheca to last her a lifetime. Then she returns to the hive. The queen can lay around 2000 eggs per day, and can live for five years, so can lay over one million eggs in her lifetime. It is the queen who has the power to decide whether the egg she lays will be fertilized or unfertilised as she can release or withhold at will sperm stored in her spermatheca. Fertilized eggs can develop into workers or new queens, and unfertilised eggs into drones (males).

The eggs are white and laid singly into the wax cells. They are fixed to the bottom of the cell by a sticky substance secreted by the queen. Fertilised eggs develop into females (workers or queens), and unfertilised eggs develop into males. The eggs hatch into maggot-like grubs (see below) and are fed by the workers. In the first 3 days of larval life the grubs increase their weight 100 times. It is during this time that the grub is fed royal jelly. Then on the third day the food is changed to a honey/pollen mix. In just 5 or 6 days the grub is fat and ready to pupate. The workers gather pollen and nectar from flowers. Honey bees, like bumblebees get all their food from flowers. The honeybee worker's tongue is covered in tiny hairs and is long and flexible, so is good for sucking nectar from flowers (see above).

The nectar is carried back to the hive in the stomach of the bee, then it stored and becomes honey as the water in the nectar evaporates and the sugar is more concentrated. Pollen is carried back to the hive in pollen baskets in the bee's hindmost legs, (see below, and the photograph above). The first leg has a comb to clean pollen and dust off the antennae and tongue. Below is the hindmost leg of a honeybee showing the flattened area of the pollen basket.

The drawing below shows, 1. the young larva, 2. the larva just before pupation, 3. the pupa. 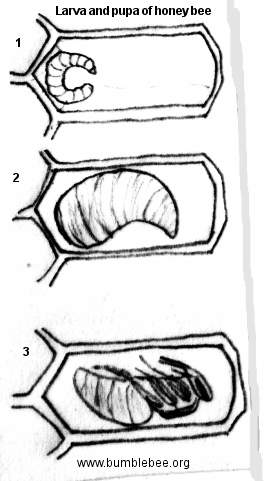 Honey bees have the typical hexagonally faceted compound eyes of insects, each eye has around 6300 ommatidia (facets), see the drawing of the head above. They also have 3 ocelli, or simple eyes.

Food. Honeybee food consists almost entirely of pollen and nectar. - both from flowers. Pollen is mainly protein, and nectar is mainly carbohydrate.

Wax. Young workers secrete wax from scales on the underside of the abdomen. This wax is moulded to make cells, see below.

Life span. After emerging as an adult a normal worker's life span is just 4 - 6 weeks during the summer months.

Flight speed has been recorded as 2.5 metres per second with a wing beat of 250 per second. Compare this with other insects.