There are around 2,800 species of solitary wasps recorded in Britain and Ireland, many are parasitic, and some are used in controlling pest insect species. The wasp larva feeds on the insect's (it is usually, but not always an insect that is parasitised) fatty tissues at first, and leaves eating the vital organs until the end as it wants to keep the host alive until just before the wasp itself is ready to form a cocoon.

There is a drawing of the Sabre wasp in a typical Ichneumonid ovipositing position below, and just below is a female showing her ovipositor. Near the bottom is Ichneumon suspiciosus showing the typical Inchneumonid body shape.

The family Ichneumonidae contains the tiny parasitic wasps. They are very difficult to identify down to species level. There are over 60,000 species world wide, and around 2500 British species. All have long antennae with usually more than 16 segments, slender bodies, and very simple wing venation (see below). The adults usually feed on nectar from flowers and honeydew from aphids. The females usually have visible ovipositors - see below. 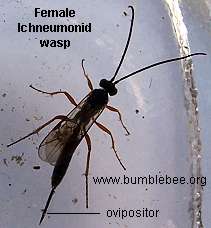 Their larvae are usually parasitic in or on other insects; mainly butterflies, moths, sawflies and beetles, and are major agents of pest insect control. Few are parasitic on a single species; usually they parasitise a group of species. The female usually lays her egg inside the victim, but some species lay the egg on the surface of the victim's body.

Ichneumonids often locate the host species by the smell from their frass (poo). Many of the host species are cryptically coloured, and some emerge to feed only at night, so smell is a good locator.

Above is an Ichneumonid Amblyteles armatorius emerging from Large yellow underwing pupa. the adult wasp's body length is 12 - 16. This is a male. Males have much wider yellow stripes than females. This parasitic wasp is commonly seen on flowers, especially umbellifers, in early summer. The female wasp parasitises moth caterpillars after she has overwintered. The Large yellow underwing is one of the moths most commonly parasitised by this wasp.

Above is Stenichneumon culpator. It is a parasite of Lepidoptera. It is found in woodland edges and scrub grassland. The adults eat pollen and drink nectar and can be seen flying from April to October in the U. K. The squares above ar 0.5 cm. 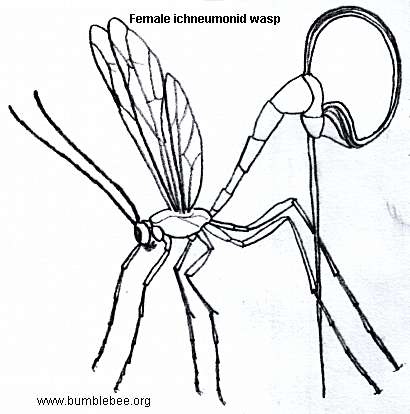 Rhyssa persuasoria, the sabre wasp, (above) locates grubs of the wood wasp by detecting the presence of a particular fungus injected by the female wood wasp at the same time as she inserts the egg. The sabre wasp has an ovipositor almost 4 cm long, though her body length is 20 - 35 mm, making her the largest Ichneumonid in the U. K. It takes around 20 - 60 minutes to drill down into the 3 cm of wood to where the wood wasp larva is located. During this time the wasp is in a very vulnerable position with no protection from predators. Adults are black with white spots and red legs, and fly from June - September. A fully grown larva can reach 25 mm long.

Most overwinter as grubs in the host, or as pupae; just a few overwinter as adults, and of these it is only the females that do so. All the adult males die with the approach of cold weather.

Ichneumon suspiciosus is black with a yellow patch near the top of the abdomen. The legs are black except for the tibia and tarsi which are yellow. Adult body length is 10 mm.

The larva is an internal parasite of caterpillars. It is seen in the summer, often on umbellifers.