There are around 2,800 species of solitary wasps recorded in Britain and Ireland, many are parasitic, and some are used in controlling pest insect species.

Above is a wasp in the Pompilidae family, they are commonly called the Spider hunting robber wasps, or Spider wasps. There are 5000 species of Pompilids in the world, mainly concentrated in the topics; with just 44 British species. In the U. K. they are usually seen in sunny weather, and this one was found hunting for spiders on rose bay willow herb and cow parsley. Note the conspicuous colours to the antennae.

Below is Ammophila sabulosa, a sand or digger wasp. It is in the family Spechidae, of which there are 8000 species world wide and 115 species in Britain.

Sphecids are solitary wasps. Their wings are held flat over the body when at rest, and their flight speed has been recorded as 1.5 metres per second (compare this with other insects).

They range in size from 0.4 - 5.5 cm long. The females catch insects or spiders to feed their larva. They sting the prey to paralyse it, but not kill it. The prey is then put in the cell with the egg so that when the larva hatches it will have fresh meat.

Ammophila sabulosa is black except for the middle part of the abdomen which is red or orange. It is usually found near pine trees and sandy soil which is where the female digs a burrow, and is most often seen in the UK in June and July.

Each burrow takes an hour or two to dig, Once the burrow has been dug she selects a pebble just big enough to rest over the top of the burrow, then she goes off to search for a caterpillar. The larvae are fed on caterpillars.The caterpillar is too big for the wasp to fly with, so usually she carries it beneath her or drags it to the burrow which she has already dug. She is capable of dragging a caterpillar 11 times her own weight back to her burrow. When she returns with the caterpillar she removes the pebble and drags the caterpillar into the burrow. Usually there is one cell, one egg and one caterpillar per burrow.

The female searches for caterpillars on pine trees or other vegetation. Once the caterpillar and egg are safely in the burrow the female will often camouflage the entrance by dragging twigs or pine needles over it.

She will supply several burrows, each with a larva at a different stage of development, so she must remember their positions and estimate when the food for each will run out.

Above is a mason wasp Odynerus sp., and below is a typical nest. There are over 3000 Eumenidae world wide, and in the UK there are 22 species. They are commonly known as mason or potter wasps. 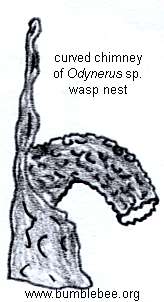 Masons usually provision their nests with beetle larvae or caterpillars. The adult wasps feed on nectar. The adults have strong jaws. The nests usually have curved towers made from the materials excavated from sandy banks or soft mortar, their preferred nesting sites (see drawing above).

The nests contain several cells with one egg per cell. As with all mason wasps the adults never see their offspring. Excavated fragments which are not used in constructing the tower are often carried some distance away from the nest site so that there is no tell-tale pile of rubble at the base of the wall/bank.

Below is a mud nest from Malaysia.