Symphyta are a sub-order of the order Hymenoptera. The main difference between the symphyta and the other Hymenoptera is that the adults do not have a "wasp waist", see above. Also none of them are social.

There are around 10,000 species of saw fly in he world, and around 500 British species, although there are no native saw flies in New Zealand.

The saw fly fossil record stretches back 180 million years to specimens found in what is now Russia and Australia. They are considered to be the most "primitive" of the Hymenoptera.

The adults have simple mouthparts with well-developed jaws and feed mainly on pollen (see the photograph below) which they grind up, although some adults are partly carnivorous. They favour open type flowers with large inflorescences of white or yellow.

They got the name saw fly because most of the females have an ovipositor that has visible saw-like teeth (see the photograph and drawing below). The female uses this to cut slits in plant stems and leaves, then she lays her eggs in the slit.

Saw flies do not have a sting.

The sawfly above is Rhogogaster viridis in the Tenthredinidae family which has 900 European species, and almost 400 species in Britain.

In this species the pterostigma on the front edge of the forewing is either all green or all yellow, and you can just make this out as she has not completely closed her wings. Adults of this species fly from May to August and are 10 - 13 mm long. The head and thorax are green with black markings.

The larvae eat a wide variety of leaves, and are green, grey or yellow with black spots along the sides. They are found on willow, poplar, alder and spirea, in forest edges and clearings.

The adult sawfly above was oblivious to me as it scrabbled around in this clover flower. Towards the end of summer the clover flowers were full of this species.

Below is a drawing and above a photograph of a saw fly saw used in cutting into plants. The saw is actually a pair of blades. Most saw flies have such structures, but some species have a more conventional ovipositor that sticks out of the rear and looks more like a drill than a saw. These are often given the name of horntails or wood wasps - see below.

Sawfly larvae feed on plants, and in plants as leaf miners or forming plant galls, and look very much like caterpillars. However moth and butterfly caterpillars have 5 or fewer pairs of prolegs, whereas saw flies have six pairs or more (see above).

The larva often feed communally on the edges of leaves. When disturbed they hold on to the leaf with their front legs and wave their rear ends in the air.

They are often rejected as food items by birds and lizards. And they do have the warning coloration of black/yellow, which means that they probably do not taste nice.

Pupation takes place in a cocoon.

The larva of Solomon's seal sawfly larva, Phymatocera aterrima is above and below. The adult sawfly is about 8 - 9 mm long, all black, and easily overlooked. The larva, as the common name suggests, feed on the leaves of Solomon's seal in the summer, and pupate in the ground. The adults emerge the following year.

The adult sawfly cuts into the stalk of the plant to lay her eggs, often leaving a small brownish scar. The larva hatch and begin eating. They grow to around 20 mm long, and can completely defoliate a plant. If you try to pick them up they often exude a brown defensive liquid. This is harmless to humans, but bitter tasting to predators. 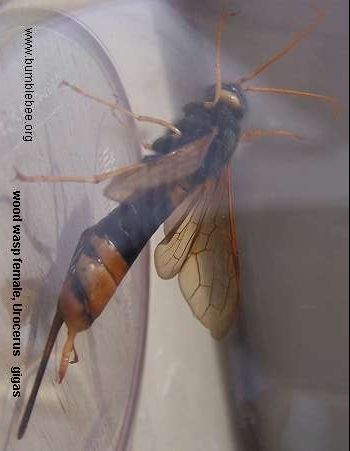 Siricidae family. Adult length is from 20 - 40 mm long. They are usually brown or black marked with yellow. Both male and females have a tail, but only the females have an ovipositor - usually longer than the tail (see above). Fossilised wood wasps have been found dating back 160 million years in what is now Kazakhstan.

Above and below is the wood wasp or horntail Urocerus gigas. It is not a wasp at all as it can be clearly seen below that it has no "wasp waist" that all bees, wasps and ants have.

Also although this female - and it is usually just the female wood wasps we see - looks fearsome, she is quite harmless. The very worst she can do is fly into you. This is a typical example of a harmless insect gaining protection from predators by mimicking a harmful one. The long, dark brown thing sticking out of her rear end is not a sting, but her ovipositor. With it she drills vertically 5 - 10 mm into wood - usually a diseased, unhealthy or dead conifer - and injects 4 - 8 eggs.

Males are rarely seen as they tend to fly around the tops of trees only when the sun shines looking for a mate.

Urocerus gigas are found in forests that have sunny clearings. They are fast and noisy fliers, and fly only when it is sunny, usually from May onwards. Female adult length is 24 - 44 mm, male adult length is 12 - 32 mm. Wingspan is 65 mm. The antennae are many-segmented. 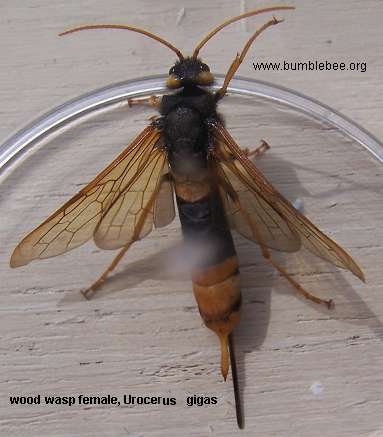 In the photographs above you will see 2 yellow bulges on the head that look like they might be eyes, but they are not. The eyes are black, smaller and just in front of the yellow bulges.

The eggs hatch in around 4 weeks and the larva spends its time eating the wood-destroying fungi that its mother thoughtfully injected along with the egg. At the base of the ovipositor there is a pair of glands that contain the fruiting bodies of the fungus, and some fruiting bodies are injected with each egg.

The larval stage lasts for 2 1/2 - 3 years, and the tunnel they make can be 30 cm long. The final larva length can be as much as 40 mm. Before pupation they tunnel to around 1 cm from the tree surface, then pupate, so that when the adult emerges it has only 1 cm of wood to gnaw through to reach the outside.

The wood wasp larva is preyed on by a Ichneumonid wasp, Rhyssa persuasoria. This wasp has an ovipositor almost 4 cm long, and searches for prey by exploring the wood surface with her long antennae until she can pick up the scent of the fungus injected along with the egg. It will take her around 20 minutes to drill through the 3 cm or so of wood to reach the wood wasp larva where she deposits a single egg.