Insects were the first animals to fly. They had functional wings over 200 million years ago (now some scientists say functional wings may date back as far as 420 MYA, so at least 100 million years before flying reptiles or birds. The wings are outgrowths on the 2nd and 3rd segment of the thorax. Unlike the wings of bats and birds, insect wings are not modified limbs. In fact all 3 segments of the thorax bear a pair of legs in most adult insects. The earliest wings stuck outwards even when the insect was at rest, like dragonfly wings today. This made the wings easily damaged, and must have prevented the insects exploring the littler layer on the ground and crowded herbaceous habitats. Later insects evolved wings that could be folded over the top of the body when not in use. This allowed these insects to forage in the litter layer, and also to rest and hide under things. To move on a step further the beetles have their front pair of wings modified to form hard wing cases called elytra. These protect the true wings underneath, and although flight performance must be reduced this has not prevented the beetles from colonising a vast range of habitats to become the most speciose family with at least 400,000 described species.

Wings are formed of the same material as the rest of the exoskeleton - chitin. The wings are a double cuticular membrane containing veins which provide structural stability.

Insects that do not have two pairs of wings include those that are secondarily wingless, and the Diptera - flies which have one pair of wings and a pair of balancing organs (halteres), and the Strepsiptera which have a reduced forewing. 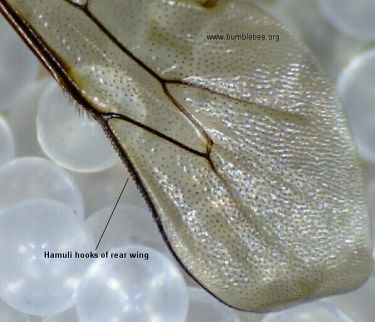 Generally the wings of species that evolved earlier e.g., dragonflies have more complex venation than those that evolved later e.g., wasps and bees.The drawing above right shows the very simplified venation of a parasitic wasp on the left, and the more complex venation of a dragonfly on the right, and the photograph on the right shows the rear wing of a bumblebee queen.

Wings can be naked or covered in scales (butterflies and moths) or hairs (caddis flies).

Some insects have wings that are modified such as the Coleoptera (beetles) where the first pair of wings forms a hard case (elytra) covering and protecting the second pair. Other insects may have wings for only a short time in their adult life, e.g. the sexual stages of ants and termites.

There is no doubt that the evolution of wings greatly helped in the dispersal and radiation of insects.

Insect antennae (above) can vary greatly in size and shape even between sexes of the same species.

Insects detect smells mainly using their antennae. The antennae are also used to touch, taste and in some cases, to detect sound.

The drawing above shows just a few of the many different types of antennae.

There are a range of modifications to the insect body parts that partly account for their great taxonomic and ecological diversity.

Leg modifications (see below and right) include:

The leg of the cat flea, Ctenocephalides felis, (not illustrated) enables it to jump 30 cm. This is because it has a hugely elastic material called resilin which is usually held compressed by the muscles in the thorax. When these muscles relax the resilin springs back to its original shape releasing a burst of energy which is transmitted to the hind legs.

The legs often have hairs and bristles which are sensitive to touch and air movement. Below left is the typical insect leg. There are usually between 1 and 5 tarsal segments, usually ending in 2 claws. The number of segments is often important in identifying species. Tarsal hairs and pores are often sensitive to smell and taste. Crickets have their ears on their front legs at the top of each tibia.

Insect reproduction falls into 3 main phases: courtship, mating and parenting. Not all insects do all 3 phases.

This is when the male and female attract each other. In some this involves sexual dimorphism and behaviour, i. e. the sexes look different - usually it is the male that tries to attract the female, e. g. stag beetles with their huge mandibles, "blue" butterflies, where only the male is brightly coloured, some male dragonflies defend a territory against all but females of the same species.

Sound. Sound as an attractant e. g. in cicadas, crickets and grasshoppers, is produced by stridulation, i. e. one part of the body being rubbed or scraped against another. Male deathwatch beetles bang their heads against the sides of their tunnels to signal a mate. In midges and mosquitoes the high frequency of the female wing beats produces a sound that can be detected by males.

Light. Light as an attractant is used most famously by the glow worm - actually a beetle.

Mating often involves the presentation of a gift by the male to distract the female, and allow the male to leave safely after mating. In scorpion flies at the end of mating the male exudes a sticky blob of protein-rich saliva which hardens in contact with the air, which he presents to the female. with Empid flies the males present an insect wrapped up in a silk parcel. Whereas springtail males produce spermatophores which they just leave in a position where they think the female is likely to find it.

Actual copulation can take from just a few minutes to many hours with the male clinging to the female's back, or joined end to end. Male dytiscid beetles have pads of suckers on their forelegs to enable them to grip on to the female securely. Dragonflies form a mating loop so that the female can reach the sperm capsule in the second segment of the male's abdomen.

Some females have visible ovipositors, e. g. crickets, ichneumon wasps and sawflies for putting their eggs in plants, wood, soil, and even other insects.

Not all insects reproduce solely by mating; some females can produce young without males. Indeed in insects adult males do tend to have a much shorter lifespan than females. Parthogenetically produced eggs are unfertilised, and certain bees, wasps, ants crickets, moths, stick insects, and aphids can reproduce parthenogenetically.

Parenting in most insects consists simply of the female laying eggs and abandoning them, but some get more involved. The social insects - bees, ants, wasps and termites rear their young in a nest community, where the young are tended until they reach adulthood.

An earwig female tends to her batch of eggs for the 2 or 3 weeks it takes them to hatch, turning them and licking them to prevent fungal infection, and defending the nest cavity against intruders. Once the young are born she feeds them saliva and regurgitated food, and will carry them off to a safer site if the chamber is disturbed. Some Heteropteran bugs also behave in this way, and burying beetles (Silphidae) feed their larvae with liquid food from the animal carcass the parents have buried.