There are just 2 British species in this family, the water scorpion, above and below, and the water stick insect, below.

The water scorpion, Nepa cinerea, (see above) got its name because of its long tail, but the tail is a breathing tube (actually two tubes stuck together), rather like a snorkel, not a sting. The body length is 20 - 23 mm, and the tail is usually around 10 mm long. It is dark brown and flat, so well camouflaged and is often mistaken for a dead leaf.

Habitat. It can be found in weedy, stagnant ponds, shallow lakes, fens and occasionally weedy streams, and tends to lurk around in vegetation waiting for prey to pass within reach.

Behaviour. It uses its front legs to catch prey, then sucks out the insides of whatever it has caught, usually other insects, tadpoles or small fish. It injects a powerful digestive enzyme into the prey to quickly overcome its struggling. They are poor swimmers. Adults can fly, but rarely do so. When taken out of the water it pretends to be dead, or crawls quickly away. The female lays her eggs underwater in the stems of vegetation just below the water surface.

Below is the nymph which has a much shorter siphon. 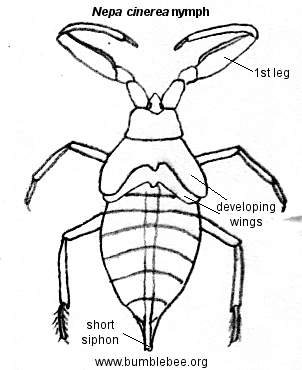 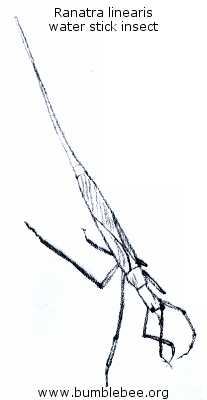 The water stick insect (above) can be around 5 cm long, although its breathing tube tail can take up half this length. It is no relation to the true stick insects which are terrestrial.

Habitat. It can be found in weedy ponds usually in water less than 1 m deep.

Adults are active throughout the winter except in extreme cold. They are good swimmers and adults can fly. The first pair of legs is used to catch prey, but they will also eat dead insects it finds floating on the surface.

Eggs are inserted in plant stems. 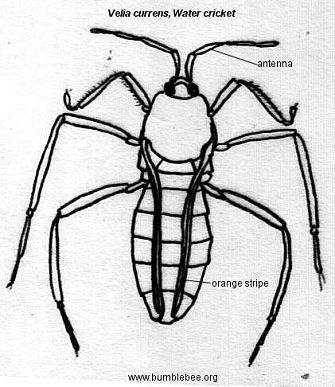 There are 5 British species in the Veliidae family. Above is the water cricket, Velia currens. It is dark brown with 2 orange stripes down the back of adults.

In both adults and nymphs the underside of the abdomen is orange. The adult can be winged or wingless.

It is common on both still and running water. It feeds on insects and other small animals which land on the water surface. The female lays batches of eggs on floating vegetation.