Water bugs must take in a store of air at the surface and keep it beneath their wings when swimming underwater. Some have a breathing tube, at their rear end (see below), which they stick out of the water to take in air, others just poke their rear ends above the surface. There are 67 species of water bug in Britain.

The eggs of bugs in the Corixidae and Notonectidae (see below) are considered a delicacy in Mexico, and are called Mexican caviar (ahuachutte).

Above is the giant water bug, Lethocerus sp. Some species in this genus can reach 12 cm long. They are found in ponds and ditches, usually just below the surface. They will fly to find a mate, and during this time are attracted to artificial light, earning them the name of Electric light bug. In Asia they are considered a delicacy. Like most water bugs they breathe through a snorkel at the tip of the abdomen.

They can be quite fearsome, and will stab prey with their rostrum and inject poisonous saliva. The prey includes aquatic insects, small fish, frogs, tadpoles, birds, and anything they can grab and stab. They will also stab in defence and this can cause real pain for a few hours to humans.

The female lays eggs in spring in batches of around 100 on vegetation just above the water line to avoid the eggs being permanently under water. The male guards the eggs and wets them as needed to prevent them drying out. The eggs hatch after 2 weeks, and the nymph will moult 5 times before adulthood. They overwinter as adults in the mud.

The giant water bug, Belostoma sp. above is an aggressive predator feeding on snails, crustacea, fish and amphibians, which it stalks before capturing. It injects the prey with digestive juices through its beak-like rostrum, and then sucks up the resulting soup.

Bugs in this genus are usually around 2 cm long, but some species can reach 12 cm. Adults come to the surface to breathe. They will play dead if disturbed, but do not be tempted to pick one up as it will stab you with its rostrum, and this will be very painful. Despite their large size they can fly, and do so mainly during the mating season.

The pond skaters, above are in the Gerridae family. There are about 500 species worldwide and 10 British species. They range in length from 0.2 mm - 35 mm.

Legs. They feed on insects that have fallen into the water using their front legs to grasp their prey, their middle legs to row, and hind legs as rudders. Prey is detected by sight (they have fairly large eyes) and/or vibration of the water surface. Although they will also eat dead insects they find floating on the water.

Pond skater feet feet are surrounded by water-repellent hairs, and these prevent the feet from piercing the water surface.

Wings. Some pond skaters have fully-formed wings and can fly; others are flightless.

In the UK they hibernate on land but near water over winter. Eggs are laid around May.

They are found on still freshwater ponds and lakes. 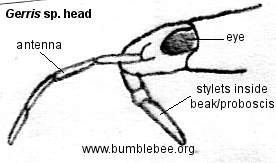 They are found world wide, there are approximately 100 species, but just 2 British species, and all are thin and stick-like.

Above is Hydrometra stagnorum, the water measurer, water gnat, pond skater, adults are 9 - 12 mm long, glossy, dark brown and with an extremely long head. They are wingless even as adults.

It is found in still water, and feeds on small insects and water fleas. The female lays eggs singly on plants above the water level. 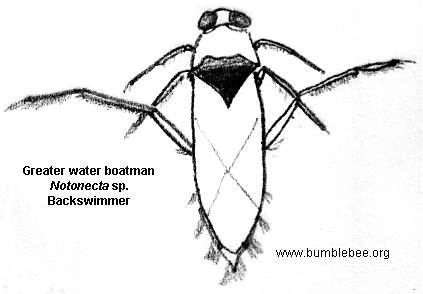 There are 4 British species in this family. The water boatmen Notonecta sp. (above) are also known as back-swimmers because they spend most of their time swimming on their back on the underside of the water surface (see the drawing below). Their air supply is held in place by the wing cases and the short hairs on the body. This makes them very buoyant. If they wish to go deeper under water they must hold on to vegetation - usually with their short front legs - otherwise they will float to the surface.

They use their forelegs to catch prey, and their hair-fringed hind legs, which are twice as long as the other legs, for swimming rather like oars. If they are put in a tank which is lit from below they will swim normally.

The prey is detected by sight and by sensing surface ripples. The prey is often bigger than they are. Some of the larger species can pierce human skin. The adults are strong fliers. 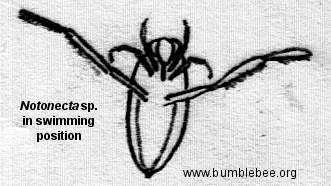 Notonecta glauca is found throughout the UK and is about 1.5 cm long. It is particularly fond of tadpoles and water beetle larvae and other insects which are detected by sight and vibration. It will also take fish fry, so is considered a pest in trout hatcheries. It has large eyes, and these along with the sensitive hairs on its legs make it a fearsome predator. It avoids acidic, peaty water.

Mating takes place any time from mid-winter to May. Eggs are laid singly from February onwards in the stems of water plants. Nymphs take around 2 months to mature.

There are 35 British species in this family, but identification to species level is difficult. The lesser water boatman Corixa sp. (above) swims normally, i. e. with their back uppermost. Fully grown adults range in size from 12 - 16 mm.

They are mainly herbivorous. Most adults are good fliers. When underwater the air supply is stored in the space between the wings and the abdomen. They are usually found in still water. Male waterboatmen can stridulate by rubbing their front legs against a ridge on the side of their head. Eggs are laid singly, attached to plants or algae.

Nymphs breathe through their skin.