There are about 5000 species world wide, and 600 species in Britain, but only about 250 species worldwide are serious plant pests. Useful aphids include the Cochineal scale insect (Dactylopius coccus) which produces the red carmine dye, and the Asian Lac (Kerria lacca) whose wax is used to produce shellac. The females suck the sap of fig trees, and to protect themselves from predators, secrete a resin to form a shield. This resin is harvested as shellac, although it takes up to 90,000 insects to produce around 450 g of lac.

Aphids are plant pests not so much because they suck the plant sap, but because they are vectors of plant viruses. Sap sucking in excess will weaken a plant, but will rarely kill it - it is the transmission of disease causing viruses on the aphid's stylets that kills the plant.

Certain insects are used in controlling aphids numbers, these include parasitic wasps, immature lacewings, and ladybirds. Other methods of controlling aphids include frequent hosing of the undersides of leaves with water, garlic and water sprays, and insecticidal soaps.

I think this is the really interesting thing about aphids. They feed on the phloem sap of plants. This liquid is very sugar-rich, (think of maple syrup), has a high water content, but is low in nitrogen and amino acids. So the bug must eat large quantities to get sufficient nutrients.

The gut is modified so that the excess water and sugar can quickly pass from foregut to hindgut then rectum, bypassing the midgut (see above which shows the sap feeding hemipteran digestive tract). The midgut is where the nitrogen and the amino acids are absorbed. This means that the excreted liquid is very sweet, and it is sometimes called honeydew. It tastes quite nice, but soon goes mouldy as you find out if you park your car under an aphid-infested tree. Forest honey and leaf honey are made by honey bees from this honeydew.

Some aphids can excrete as many as seven droplets of this sugar-rich liquid an hour - that can be as much as 133% of the insect's weight! And some hemipterans consume more than 100 times their body weight per day.

The photograph above shows ants guarding aphids while the aphids suck sap from a rose bush. The aphids get too much sugar from the sap and excrete it (this liquid is called honeydew) and the ants lap it up, drinking some themselves, and taking the rest home for their nest mates and grubs.

The tip of every leaf was guarded by at least one ant, and other ants patrolled over the aphids, and up and down the stems. Any other insect, or even a camera strap would be nipped and squirted with formic acid. So the aphids are free to suck in peace and the ant gets a sugary reward. And the rose bush? Well it was quite a big bush and a short time later it had many fragrant blooms.

When there are no ants around to collect the honeydew the aphids flick or squirt the droplets away.

Above is a drawing showing the position of the stylets as it enters the plant cell wall to suck sap.

The cornicles or siphunculi (see the photograph and drawing below) release an alarm pheromone, and secrete a waxy liquid that deters predators. They do not secrete honeydew as stated in some older books. The alarm pheromone allows the aphids to communicate to others in their group. 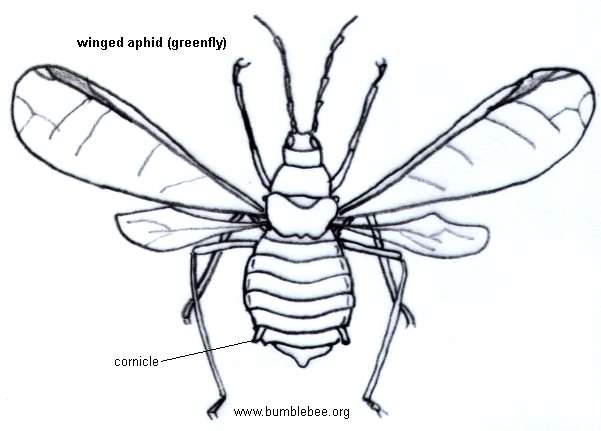 Aphids are also prodigious breeders. Females can give birth without mating (parthenogenesis). During summer the young are born live, and one female can give birth to numerous females in a day. Theoretically a single female aphid could produce over 3 million descendants in a single year.

Some aphids have wings and others are wingless, see the drawings above and below. 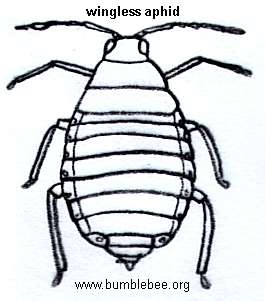 Above is Rhopalosiphoninus latysiphon - the bulb and potato aphid. As its name implies it is commonly found underground - note how its antennae are flexed backwards to ease movement in the soil.

Whiteflies belong to the Aleyrodidae family, there are 1500 species world wide, around 50 in Southern Europe, and 19 British species. It is mainly a tropical family. They look like minute white moths from 1 - 3 mm long. Their wings are covered in a waxy white powder, and their antennae have 7 segments.

They suck from the undersides of leaves, and exude a large amount of honeydew. And often it is this sticky honeydew that is the first sign of whitefly that the gardener notices when there is a whitefly infestation. The Cabbage Whitefly, Aleyrodes brassicae, attacks cabbages and related plants. The Greenhouse Whitefly, Trialeurodates vaporariorum, attacks cucumbers, tomatoes and many other plants.

Whiteflies were one of the first pests to be controlled by a natural enemy (bio-control). In England in 1920 Encarsia formosa, a tiny parasitic wasp, was used to control whitefly in greenhouses where tomatoes were grown. Then, with the abundance and ease of the use of new pesticides made in the 30s and 40s bio-control died out. It was revived by the Dutch greenhouse tomato growers in the 70s when their whiteflies had developed resistance to the currently available pesticides.