The Hemichordates are separated into three Classes which differ considerably in shape.

They are worm-like bottom dwellers. Some species are colonial, and some live in tubes they have secreted. Most are either sessile or sedentary. They range in length from 0.5 - 250 cm.

These are commonly known as the acorn worms. There are about 70 species, and are usually less than 2.5 cm in length, though some are larger, see Saccoglossus kowalevskii below.

They are worm-like and mucous covered with a long ciliated proboscis which is used in food gathering and burrowing. Two rows of pharyngeal slits run down the trunk, but have no gills attached. Some respiration and gas exchange does occur through these slits, but it also occurs over the entire body surface. They have no lophophore.

They are sluggish movers and live under stones or in burrows in mud or sand, usually in the intertidal zone. Reproduction is both sexual and asexual (fragmentation), and fertilisation is external.

Saccoglossus kowalevskii, above, is common on the Atlantic coasts of Europe and North America.

These animals live in tubes from 1 - 7 mm long, and ten species have been described so far. The tube is attached to the substratum by a stalk (see below). Some live colonially. Their collar has a lophophore of 1 - 9 ciliated, mucous secreting arms that are used in food gathering. Some species have one pair of pharyngeal slits; other species have none. Their gut is U-shaped with the anus near the mouth. 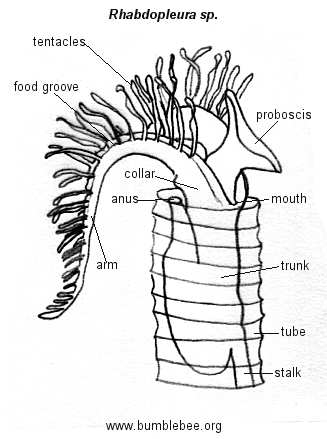 Rhabdopleura sp. (see one individual above) forms colonies in connected tubes. They have two arms with a food groove and tentacles branching from the collar. Reproduction is by budding.

This group is known only from the larval form which is similar to the Enteropneusts, but much larger - up to 2.2 cm in diameter.