Limpets graze on algae and will return to the same place before low tide. They will eventually form a "scar" on the rock which perfectly fits their shell outline.

Abalone are also algae grazers. The series of holes in their shells are used for drawing a current of water to pass over their gills, and for expelling waste. Some species have beautiful iridescent shells which are used for making jewellery. 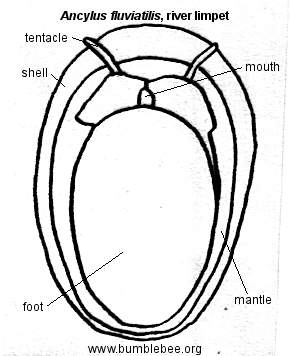 Above is Ancylus fluviatilis, the river limpet. It has a thin shell which is slightly hook-shaped. when viewed from the side, and 5 - 8 mm high. It clings to stones in fast-flowing rivers and streams, and occasionally at lake edges. It requires clean, silt free water. The edge of the shell is not hard, and so can deform to fit the irregular shape of stones. It lays eggs, usually 2 - 10 in a round, transparent capsule attached to stones. It is found throughout the U. K.

The Sub-class Opisthobranchia contains all the other Gastropods, e.g. the sea slugs, sea hares and sea butterflies. There are around 2000 species. They are mainly bottom dwelling, marine, and are mostly found in shallow waters. They show partial detorsion, and many are secondarily bilaterally symmetrical and have a reduced or no shell or mantle cavity.