Most species in this family induce gall formation in plants giving them their common name of gall wasps.

There are around 2000 described species world wide, and 91 British species, all are small.

Each species induces its own characteristic gall e.g., Robin's pincushion on the leaves of roses is caused by Diplolepsis rosae. The most common food plants of gall wasps in Europe are oaks and roses.

The presence of the larva causes the plant tissue to grow in a particular way to provide food and shelter for the larva. Many of the galls become parasitised by other wasps, especially those in the Ichumonidae family. The galls usually mature in late summer or early autumn. 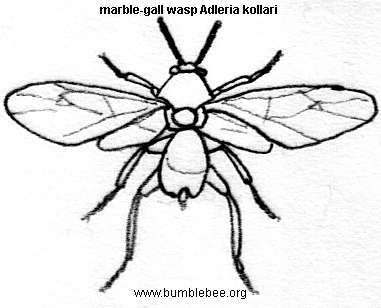 Above is the adult marble gall wasp, Adleria kollari, also known as Andricus kolleri. It produces spherical, single-celled, waxy galls on oak that are green at first, then turn a reddish brown, below.

The gall is formed on the leaf buds of the oak. The female wasps uses her ovipositor to inject an egg into the leaf buds. The resulting gall is a chemically-induced distortion of the leaf bud. At first the gall is green, later turning brown and growing hard, measuring around 25 mm in diameter.

The wasps were introduced into the U. K. in the 1830s in Devon. Like the Spangle gall, below, there is a sexual alternation of generations, and the whole cycle can take two years to complete in colder areas. The marble gall develops from an egg laid by a female wasps that has mated. Each marble gall contains a single larva and all are female. When these females emerge as adults from their gall they do not mate, but lay an unfertilised egg in the leaf bud of the non-native Turkey oak. These galls develop over winter, and the larva inside grows and develops and emerges as an adult the following spring. Both males and females emerge from the galls on the Turkey oak. These adults mate, and the female continues the cycle by ovipositing an egg inside the leaf bud of a native oak.

Above are the galls on the back of an oak leaf caused by the Spangle gall wasp Neuroterus quercusbaccarum. The wasp itself is tiny, measuring about 3mm long. A single leaf can have as many as 100 galls with each gall containing one wasp larva. The larva feeds all through the autumn and winter. And emerge as adult wasps in the spring. The galls are slightly hairy, and are yellow-green at first, then change to dark red later. Usually the gall drops off the leaf before the leaf drops off the tree. Galls still on fallen leaves are less likely to develop. Fallen galls are eaten by thrushes and wood pigeons.

Spangle galls are not considered a problem on healthy trees, although a heavy infestation may cause a pause in growth of a young tree. The larva secretes chemicals that induce gall formation.