The Cerambycidae family contains the longhorn beetles. There are 25,000 species world wide, 700 in Europe, and 675 species in the British Isles. Many species are pests of commercial forests giving them their other common name of timber beetles. Most adults have antennae that are at least half as long as their body, and may be as much as 3 or 4 times as long. Adult body length ranges from 6 - 75 mm long. They usually have long, narrow bodies and long legs. The adults feed on sap, pollen and nectar, and are often very beautiful, but their larvae (below) tunnel in wood eating as they go. The larvae are fleshy and cylindrical. Their head can be retracted into the thorax. Their legs are tiny and cannot be seen from above.

The females usually lay their eggs under the bark of the host tree, and the larval life cycle can take several years to complete.

Above is a typical longhorn (Cerambycidae) beetle larva.

The adult (above) has 2 distinct whitish/yellowish marks on the side of each elytron, and a less distinct reddish one between; these marks do vary, but are rarely absent. The adult ranges in size from 12 - 22 mm long. The adults are seen from May to August on flowers and host trees.

Strangalia quadrifaciata above is a beautiful beetle found in European woods, but is rarely common. The body length rages from 11 -19 mm. There can be quite a lot of variation in width of the yellow bands on the wing cases (elytra).

Adults are most commonly seen on flowers or old wood in July and August.

Aromia moschata, the Musk beetle (above and below) adults measure 13 - 35 mm long, and they get their name because they smell of roses. The adults are a beautiful metallic blue/green, and are found from May - September. As is common with most Cerambycidae the male has longer antennae than the female. The larvae are found in willows, and can take over 3 years to reach maturity. 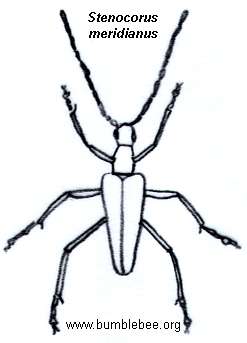 The adult is black, or brown and black, with red or black legs and antennae. In the U. K. the adults can be seen in May and June, usually at woodland edges, often on flowers as they eat the pollen, but they tend to be restricted to southern England. They are 15 - 25 mm long, with the females being much larger than the males, much broader in the body, and darker in colour.

The larvae eat the wood of damaged or diseased deciduous trees.