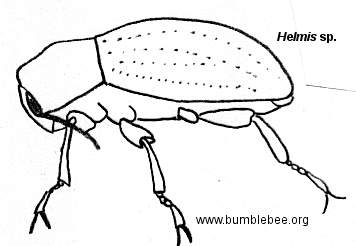 There are 9 British species in the Dryopidae. All British beetles in this family are vegetarian, small (adults are usually less than 5 mm long), and are found in fast-flowing rivers and streams. The adults have, long, sharp claws (see Helmis sp. above) enabling them to hold on to stones etc. Both adults and larvae require a similar habitat, and so are often found together. 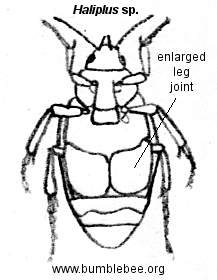 All the 19 British beetles in the Halipilidae are small - 5 mm long. They are easily recognised if you turn the adult on to its back you can see that the first joint of the hind leg is enlarged to form a large plate, see Haliplus sp. above. Also each elytron (wing case) has about 10 rows of punctures running lengthwise. Both adult and larva (see below) are found among thick algae, especially Spirogyra, other aquatic vegetation, or under stones in still and running water. The adult is yellow or reddish brown. The larva feeds on Spirogyra and has long triangular spines down its back and a long tail. 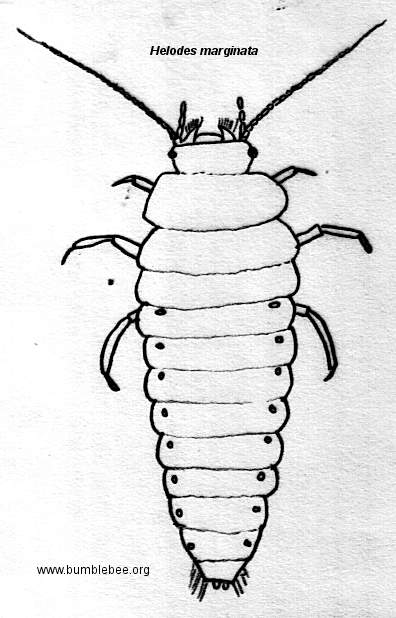 The 20 British species in this family have terrestrial adults that do not stray far from the larval habitat, and aquatic, filter feeding larvae. Above is a larva of Helodes marginata. When fully grown it is 10 mm long. It is found on the undersides of stones in small rivers and mountain streams. 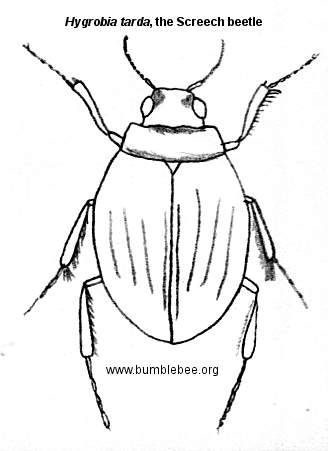 In the UK there is just one species in the Hygrobiidae, Hygrobia tarda also known as Hygrobia hermanni, the screech beetle or squeak beetle, above and below. The adult (above) is about 10 mm long, and the larva (below) 12mm long. Both are found in muddy ponds and ditches.

The larva tends to stay near the bottom of the pond where it feeds on Tubifex worms. It pupates out of the water, and the whole lifecycle takes less than 4 months - very short for a beetle.

The adult has a very convex, reddish brown body, with darker elytra and a black edge round the thorax, and prominent eyes. The beetle gets its common name from the sound the adult makes when picked up. It makes this sound by rubbing the tip of its abdomen against its elytra.