There are around 2,000 species in the world, 70 have been recorded in Britain. The larvae range in length from 1 - 48 mm. The fossil record date back to the Jurassic.

The beetle below is a typical water beetle belonging to the Hydrophilidae family. It has the long palps and short antennae typical in this family. Not all the beetles in this family are aquatic - there are a few terrestrial species, although these tend to be found in damp, marshy places. The aquatic adults are easily recognised in water as their under-surface appears silver, though they are usually black. This is caused by the air supply held in position by hairs.

Some of the species are wholly carnivorous, some vegetarian, and others omnivorous.

They are much slower swimmers than the Dytiscidae. The way to tell the two families apart is to note the difference in sizes of their palps and antennae. In the Hydrophilidae the palps are longer, or at least as long as the antennae, and the antennae end in clubs.

Breathing. Adults collect their air supply through their antennae, and it is stored as a bubble attached to the underside of the body. The larvae take in air through a pair of spiracles in the tail (see the drawing of Hydrobius sp. below). The larvae tend to be slow moving.

In some species the female carries her eggs around in a silken case attached to her abdomen or hind legs.

Below is a pupa from the genus Philydrus. 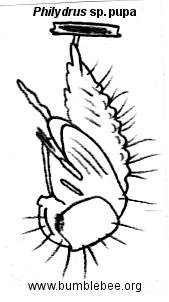 The adults are around 5 mm long. The female makes an egg cocoon which she attaches to floating plants.

The larvae often emerge from the water, and the pupa is always found out of water, usually hanging from moss with the final larval skin found beneath it.

Below is a typical Hydrobius larva.

Above is Hydrophilus piceus (Hydrous piceus), the Great Silver water beetle in some books it is also known as the Great Water Beetle which is the common name for Dytiscus marginalis. This is the second largest British beetle with an adult length of 38 - 48 mm, and the largest British water beetle. Most of the other British species in this family are less than 1 cm long as adults. The adults are black with red antennae. Even though they are large they can still fly, but tend to do so at night. They hibernate over winter in mud at the bottom of ponds. They are rather slow moving and mainly vegetarian.

The adults have needle-sharp spurs on their tibia, and a sharp spine on their underside which can cause injury if the beetle is not handled carefully.

The females construct egg cocoons of silk produced from a gland in the last abdominal segment. Each female lays about 50 eggs in the cocoon which floats. The eggs hatch after 2 - 6 weeks, depending on temperature.

The larvae (above) are found in weedy ponds, especially those covered in duckweed, and they are carnivorous eating snails and tadpoles, they are also cannibalistic if they have the chance. They breathe through spiracles on the last abdominal segment. A fully grown larva can be as much as 7 cm long. They pupate in damp earth at the side of the pond. Sadly this beetle is much less common now than it used to be.

Above is an adult Hydrobius fuscipes, and below the larva, it is common in stagnant water, weedy ponds and ditches and shallow lakes with muddy bottoms.

Adults are about 8 - 10 mm long, and have a blue, black or green metallic sheen with about 10 long grooves down each elytron (wing case), and reddish brown legs. The antennae are often clubbed.

The larva grow up to 12 mm long, and are soft with short legs. They look a little like a maggot.

Sphaeridium scarabaeoides, above, is found in North America (it is non-native and was introduced), Europe and northern Asia, in the wet dung of domestic livestock and wild herbivores. Both adults and larvae live and feed on dung, which is a pity as it is a beautiful shiny beetle with short clubbed antennae, but it is hard to admire one as you do know where it has just been and where it would rather be. Adult body length is 4 - 7 mm.