There are over 1000 species of Anobiidae world wide, 76 species in Europe and 28 species in Britain. The adults are usually cylindrical in shape with their head largely hidden. Most of them tunnel in wood, and many are considered pests. The typical shape of the larva is seen in the drawing below, but as they are usually in a tunnel, they are rarely seen. The Ptinidae (spider beetles) is sometimes included in the Anobiidae. 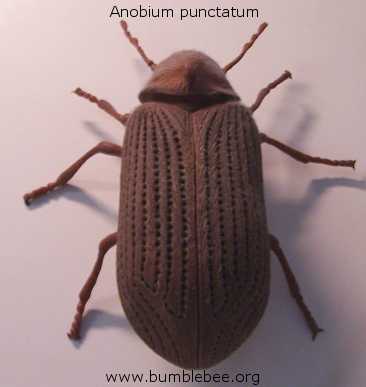 Anobium punctatum, the furniture beetle, woodworm above. This beetle is a pest in timber, buildings and furniture. It accounts for 80% of ALL insect damage to timber buildings in Britain.

The adult is 2.5 - 5.0 mm long, chocolate brown in colour, however lighter and darker individuals are seen, and is covered with short golden hairs, but you need a hand lens to see these. The head cannot be seen from above as it is hidden by the hood-like prothorax with a high hump.

Adults can fly, but it is usually only the males who do so. Adults emerge into the open to mate. This is commonest in July and August. Then the female lays her white eggs in the circular exit hole. A female can lay 20 - 60 eggs in groups of 2, 3 or 4 wedged into cracks, crevices and joints of unpainted and unpolished wood.

The eggs are 0.55 x 0.35 mm, hatch in 4 - 5 weeks, and the larvae immediately start tunneling into the wood. The larval stage lasts for 3 - 4 years, and during this time they just eat their way through the wood. The larvae can only be seen if the wood is broken open. They grow to around 7.0 mm long and are greyish white with a yellow head.

When the larva is ready to pupate it makes a tunnel parallel to and just below the wood surface. It bites its way to the surface when it hatches out as an adult. This is why adults will sometimes emerge from timber treated against woodworm, as the treatments do not usually penetrate more than a few millimetres. The exit holes are 1.5 - 2.0 mm in diameter.

It can live outdoors and will infest dead wood on a living tree. Outside it prefers hardwoods such as oak and fruit trees; indoors it prefers soft woods such as are used in floors and rafters. Infestation normally occurs when furniture from an infested house is moved into an non-infested house.

Stegobium paniceum, the biscuit beetle, also known as the drugstore beetle and the bread beetle 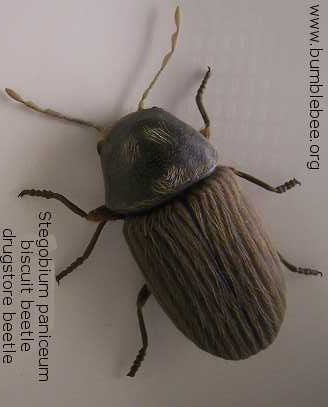 Above is Stegobium paniceum, the biscuit beetle, also known as the drugstore beetle and the bread beetle. It is also in the Anobiidae family. It attacks stored food and is found world wide, though indoors only in colder climates.

The adult length is 2.2 - 3.5 mm, and it is brown or reddish brown with rows of fine hairs down the elytra (wing cases). Females can lay up to 75 eggs on food or in food debris. The adults live up to two months, and the entire lifecycle takes between 2 - 7 months depending largely on the temperature.

It has been said that this beetle, "eats anything but cast iron", and the grubs will even eat strychnine, belladonna and aconite! It can penetrate tin foil and even sheet lead. The larva (grey/white 1- 4 mm long) tends to live inside food, so usually only the adults are seen.

Above is a male Ptilinus pectinicornis, Fan-bearing woodborer. The antennae of the male are spectacular and are never still. This beetle is fairly common in England and Wales but less common as you move north, although this one was found in Aberdeenshire. Thier fafourite wood is beech, but the female will bore into almost any deciduous hardwood. She has fairly boring antennae, but otherwise looks the same as the male. They fly in sunny weather during the day time from May to July. They can do damage to wood indoors. Adult length is 3.5 - 5.5 mm.

Above is an adult female glow worm, Lampyris sp. There are 2000 species world wide, 3 British species, and they are mostly nocturnal. The adults range in length from 5 - 20 mm long. Note that the female is wingless. Most females are either wingless or have short wings. The Lampyridae larva, below, is flattened and leathery. They are found on grasses where they can find their preferred prey - snails. Some of the larvae are slightly luminous.

Mating. In some species the female glows to signal to the male when she is ready to mate. The male hardly glows at all. However in other species both male and female signal and answer. Photuris versicolor females lure other males in the Photuris genus by imitating the flashing sequence of the females. When the males arrive they eat them.

Luciferin. The glow is produced by oxidising oxygen and luciferin in the presence of the enzyme luciferase, and reflecting this by means of urate crystals. The glow is turned off and on by the beetle controlling the supply of oxygen to the luciferin.

Feeding. Many glow worms eat snails. Both the adults and the larvae inject substances into the snail's body which first paralyses it, then liquefies it. The glow worm sucks up the now liquid snail until the shell is empty. The British species do not feed as adults. In some cultures glow worms are used as hair decorations.

The firefly's flame
Is something for which science has no name.
I can think of nothing eerier
Than flying around with an unidentified glow on a person's posterior.
Ogden Nash