Many ground beetles are specialists, e.g. Cychrus caraboides (see below) feeds solely on snails and has a narrow head and thorax to enable it to better reach its prey. They are nocturnal and common in deciduous woods, especially around old, rotting tree stumps and fallen branches. They overwinter as larva and adult.

Adults can be seen all the year round, and are 16 - 21 mm long. They are most active from March - December, and especially in late summer. When resting it is found under stones and logs.

Cychrus caraboides is also able to squirt yellow acid out of its rear end with some accuracy in order to startle any predator.

I can vouch for the accuracy having received a full load in the face when I was restraining one for a mark and recapture exercise by attaching it to a broom handle with an elastic band so I could paint a numerical code of dots on its elytra. Not all science is high-tech! And if that were not enough it can also stridulate when picked up making a noise some describe as a squeak, but I think is more of a metallic hiss, and never fails to alarm the uninitiated.

The larva can grow up to 20 mm long, and unlike other carabid larva, it is short and fat. Like the adult, it lives mainly on slugs and snails, and can be seen in the autumn.

Adult Bombardier beetles are seen in August in chalky districts in the south of England, Wales and S. E. Ireland. By day they tend to hide under stones, and their favourite habitat is river and stream banks.

The Japanese Bombardier beetle, Pheropsophus jessoensis is sometimes preyed upon by toads. Toads do not have teeth, so the beetle ends up in the stomach of the toad relatively unharmed. Once in the stomach it squirts its toxic mix making the toad vomit up the beetle. Sometimes the escape can take as long as two hours. In a study just under half the beetles escaped.

Harpalus rufipes is another specialist, it eats the tiny seeds on strawberries, this does not damage the fruit, but does spoil its appearance. This beetle is also known as the strawberry seed beetle.

The adult is 14 - 16 mm long, has a black body with reddish-brown legs, antennae and mouthparts.

Loricera pilicornis above and below. It is from 6 - 8 mm long, and tends to inhabit wet or damp places.. It is very easy to recognise this beetle by the long bristles on the first 6 segments of its antennae. It uses these bristles to form a sort of cage in front of its mouth to trap springtails and mites, which are its favourite prey.

It has 10 regular striations on each elytron (wing case), and in the fourth interval there are 3 round depressions. Below is the larva. 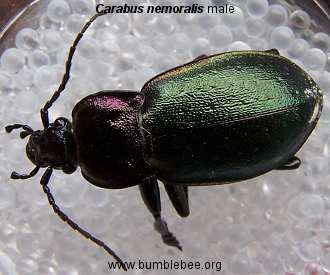 Above and below are photographs of Carabus nemoralis, a stunningly beautiful beetle - a male above and female below. It ranges in size from 18 - 28 mm, the elytra (wing cases) have a copper sheen with irregular ridges and three lines of pores down each elytron (see the photograph below). It is found throughout Europe in most habitats. It has been introduced to North America.

Below is a close-up of the fearsome mandibles used for crushing and slicing through prey - it will eat or try to eat any animal it can.

Carabus nemoralis adults are seen mainly in August and September, and are active at night.

Below is a close-up photograph of the tarsal pads of the male in the photograph above. These are on the underside of the first pair of legs. Tarsal pads are found in many Carabid beetles, especially those which climb. However in other species they are restricted to the males. They are thought to help the male cling to the female during mating - which can be prolonged. The pads are spongy and made of rows of spoon-shaped bristles. All Carabidae have 5 segments to their tarsus.

Harpalus latus above, adults range from 7 - 11 mm long, and have reddish legs. It is a fairly common beetle found in many habitats, but most often seen in woodland or shaded ground under moss, fallen branches and leaf litter. It can be seen all year round, but is most common from May - August. Unusually for a carabid it feed on plants.