On this page overview of ladybirds, life cycle, defensive behaviour, name, and a species list

The ladybugs or ladybirds, these belong to the Coccinellidae family. There are 5000 species world wide, 200 in Europe, and around 54 in the British Isles, and 27 species in Ireland, and most have the characteristic round shape. World wide they range in adult body length from 1 - 15 mm. The antennae are short and end in a club. Below is one of the most common species, the 7-spot. 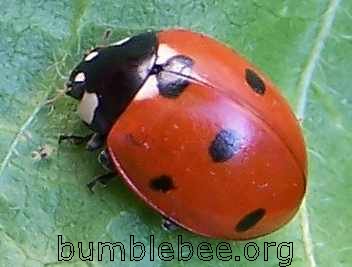 Most ladybirds in the U. K. have an annual life cycle. They overwinter as adults, and mate in late spring. The eggs are laid soon after mating, and hatch in early summer, and for the next few weeks the larvae eat and eat and eat. Then they pupate, and emerge as adults in late summer. Some species, e. g. the 2-spot and 14-spot, can manage two generations in a year, and Harlequins have been known to manage three!

The eggs are a long, oval shape, and range in colour from light yellow to deep orange. The females lay the eggs on plants - usually on the underside of leaves, and as a newly hatched ladybird larva can survive for only 60 hours without food, the egg must be laid near their food - usually aphids or their relatives. The females lay batches of 3 - 50 eggs. Normally a female can lay 100 - 200 eggs in her lifetime. Earwigs are predators of ladybird eggs.

The larvae (see generalised drawing below) on hatching eat their egg shell, and may even eat any unhatched eggs. After this they search for food, and they usually do not have far to look as their mother always lays her eggs where there will be sufficient food within easy reach. The larvae moult three times before pupating. Most adults and larvae (see the drawing below) are carnivorous, though there are a few herbivorous species. Each larva will eat hundreds of aphids in its life. Both adults and larvae are now sold as biological control agents. An Australian ladybird, Rodolina cardinalis, was introduced to California to control the cottony cushion scale insect, a bug, that was a pest on the citrus crop. 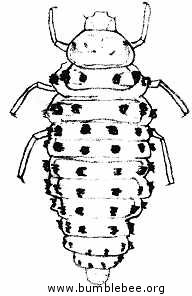 The larvae are short and fat. Their body has numerous tubercles and spines. The colours are brown, blue-black with yellow. Their legs are long and they are usually found on plants and trees in batches of 10 - 50 near their aphid prey. They pupate on leaves attached by their tail.

On emerging as adults the elytra (wing case) will not take on the true adult colours for several hours, and during this time the exoskeleton hardens. The dark colours come from melanins, and the light colours and reds from carotenes. The bright colouration of both adults and larvae is a warning to predators that they taste foul! This is termed aposematic colouring.

Here is a short movie of ladybirds mating

Normally ladybirds have no special courtship behaviours. If the female finds the male acceptable, they just get on with it. However, if she does not find him acceptable, and cannot simply run away as he may have a tight grip, she will raise her abdomen to try and make him lose his footing, kick him, or roll over on top of him. If all of this fails she will climb up higher and jump off to try to fly. Many males are not very choosy about their mating partner, in fact, many of them will try to mate with anything ladybird-shaped. That includes other males, other species of ladybird and it has even been said that they will try to mate with an orange lentil!

When a ladybird feels threatened it will draw in its legs under its body where they fit perfectly into grooves. Then it will clamp itself down onto the leaf of whatever surface it is on. The upper body is hard and smooth, and so difficult for a predator to get a grip of. Along with many other insects the ladybird can reflex bleed, this means it exudes a foul tasting yellow/brown liquid. This will also deter some predators. However, despite their warning colouration and defensive behaviour, ladybirds do get eaten. The main predators are spiders, birds and other insects. Parasitic flies also lay their eggs on or in ladybirds.

Where did the ladybird get its name?

There are a number of possible answers to this question.

1) In medieval times the red body reminded people of the red cloak worn by the Virgin Mary in paintings. Remember this was a time when there were few visual images.

2) The seven spots on the very common 7 spot ladybird were said to represent the Virgin mary's 7 joys and 7 sorrows. And put this with 3 below.

3) Ladybirds can fly so "Our lady's bird.