Adults. Chafer adults usually have the final segment of their abdomen just visible from above. They have the characteristic lamellate club antennae formed by the last 3 - 7 segments of the antennae this can be clearly seen in the photograph below. Usually the adults have short, strong legs with spines, useful for digging. their bodies are usually quite stout and heavy.

Larvae. Scarabid grubs (see the drawing below) usually develop in the soil and feed on roots (chafers), or are found in dung or decaying organic matter. The larvae feed on their surroundings. And they are always the characteristic "C" shape, and are usually white or grey with a hard head and three pairs of longish legs. Larval life tends to be measured in years - much longer than adult life. Melolontha melolontha, above and below, takes about two and half years to mature.

Melolontha melolontha are found in Europe and temperate areas in Asia. The cockchafer female has a shorter antennae club than the male. The male's antennae end in 7 flaps that can be opened up and closed like a fan. Each flap is studded with sensory pits receptive to the chemical signal released by the female. When opened like a fan the male has a better chance at detecting the chemical molecules. When the flaps are closed it means he is not seeking a mate. The female has only 6 flaps. The elytra (wing cases) are reddish brown. Cockchafers range in size from 20 - 35 mm.

Although very large and heavy they do fly, and the drawings above show the position of the front wing cases during flight, and at rest. When they fly they make a buzzing noise which can be alarming, but they are harmless.

Their flight speed has been recorded as 3.0 metres per second with a wing beat of 46 per second. Compare this with other insects.

The adults eat flowers and foliage.

The female deposits her eggs about 15 cm below the soil surface. The larva, see above, eat plant roots, with grass roots being preferred. They feed near the surface during warm months, and become inactive during winter. The drawing above is of a three-year-old larva. They can grow up to 60 mm long. They have a shiny brown head and legs, with a dirty white body. The larvae are sometimes called rookworms as rooks are supposedly fond of eating them. They live on this diet for three - four years before digging a burrow and pupating in an oval cell about 60 cm deep in the soil, see below.

Pupation takes a month, but the adult will remain in the pupation cell until spring. The adult beetles emerge from the soil around May, which is why they are also known as May bugs. When the adult beetle emerges it flies to trees, and for the next few days it will eat leaves and mate. Then the female returns close to where she emerged from the pupa, and lays her eggs 15 - 25 cm below the soil. She lays 25 - 40 eggs. Then she returns to the trees to feed and mate for another 2 - 3 weeks before a second period of egg laying. And this is repeated for a third session of egg laying.

Above is Cetonia aurata it is a brilliant golden green above and coppery underneath, though the colours can vary. The elytra have irregular transverse white streaks. The larva feeds on plant roots, humus and rotten wood especially beneath elm stumps, and can be considered a pest. The larvae grow up to 50 mm long, the have a brown head and legs, and a dirty white body. The larvae pupate over winter in soil which has a lot of decomposing vegetable matter. Adults emerge when the temperature is above 15oC. 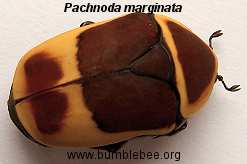 Below is the larva of of the sun beetle, and above is the adult. These are sold as pets and are quite easy to rear if kept at room temperature. The grubs are also reared to be fed to reptiles. 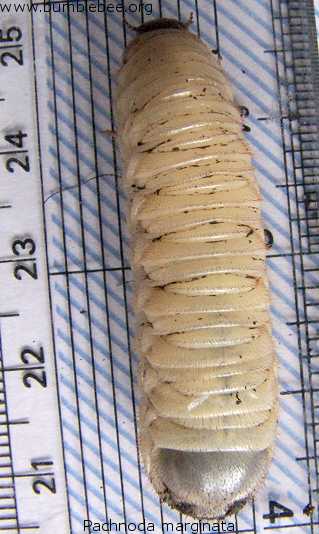 Above is an Ansioplia sp., these are found in central Europe. Note the lamellate antennae.

The adults live mainly on cereal and grass flowers, and the larvae on grass roots. They tend to be found on warm, dry slopes with sandy soil.

Below is Aphodius sp. (which has recently changed its name to Acrossus) showing the typical adult dung beetle shape - the strong, digging legs, shovel-like head good for moving earth and dung, and lamellate antennae with the plates at the end that can open up better to locate any scent molecules of fresh dung.

Aphodius rufipes, or now with its new name of Acrossus rufipes (above) is most commonly found when it loudly and repeatedly bumps into electric light sources at night, hence its common name of Night-flying dung beetle. The rufipes part of the Latin name refers to the reddish/brown colour of the beetle's feet, so now you can wow your friends as anything with the Latin rufipes in the name means it will have reddish/brown feet. The rest of its body is a shiny black or very dark brown. An adult is 9 - 13 mm long with 10 ridges along each elytron (wing case). It has the typical shovel-shaped head useful for moving both earth and dung and the spiny, strong legs good for digging, hauling and moving through a pile of dung. The lamellate antennae are opened up in the photograph above to increase the surface area making it more likely to pick up any desired smell.

In the U. K. this beetle is most commonly seen from April to October at night time. During the day it burrows into the soil. So if you catch one pinging off your TV, lamp or computer screen the kindest thing to do is to take it outside. Its favourite dung, (a dung beetle has preferences just as we do) is horse or cow dung, and it will fly quite far in search of it, so adults can be found just about anywhere, but they will use other types of dung if they have to. Both the adults and larvae are dung feeders. The eggs are laid into the dung, and hatch to find themselves surrounded by food. All they have to do is eat. When the larva is fully grown it buries itself into the ground to pupate.

What dung beetles do for us

Dung beetles perform a very necessary service to us humans with our ever increasing consumption of meat. For example, in the U. S. there is almost 1 cow for every 3 people. Each cow produces about 9 tonnes of dung a year! And how do we get rid of this dung? Well for cows reared outside we do nothing at all. The dung beetles and other invertebrates perform that service for us for free.

When dung beetles bury dung they not only remove it from the surface of the soil, but by burying it they allow the dung to fertilise the soil better, and the tunnels they dig aerates the soil too. One elephant dropping can attract as many as 16,000 dung beetles; 4000 within the first 15 minutes!

In Australia there are no native dung beetles, and after the introduction of cattle in the 19th century there was a massive fly population explosion because of all the piles of dung lying around for months on end. So they introduced a South African dung beetle. This greatly reduced fly numbers, which pleased both cattle and humans.

The ancient Egyptians associated the dung ball rolling behaviour of the adult beetles with their sun god, Ra, or Khepera, whom they believed rolled the sun across the sky, consequently dung beetles were venerated in their culture. Dung beetles were also associated with Atum, the creator god of eternal life and resurrection. As the adult beetles would emerge from the buried balls of dung, the ancient Egyptians believed that by burying human dead, the humans would rise again too. Even today the image of the adult scarab beetle in jewellery is supposed to bring good luck to the buyer and wearer.