These are considered to be the most sophisticated molluscs, and possibly the most intelligent invertebrates. There are about 660 species and a large size range, the Giant squid (Architeuthis sp.), can be over 20 m long.

The cephalopod fossil record goes back to the Cambrian, and were similar to the nautilus extant today. They have a wide range of behaviours, a relatively large and complicated brain, and a great capacity for learning. All are predators.

The foot has developed into a number of prehensile arms with suckers around the mouth, with one or two modified for sperm transfer (see mating below); and a muscular funnel in the mantle cavity. This funnel is used in movement when water is forcibly expelled through it, a form of jet propulsion.

They have a radula and a pair of beak-like jaws. They also have an ink gland which releases a cloud of ink through the anus when the animal is alarmed. The ink cloud can act as a decoy to a predator allowing the cephalopod to escape.

There are two Sub-classes, the Nautiloidea with six species, and Coleoidea which includes the squids, octopuses and cuttlefishes. All are marine.

The Coleoidea have no external shell. Cuttlefish have an internal calcareous shell, squids have a thin cartilaginous pen, and in octopods the shell is absent, see Eledone sp.

Octopuses tend to be solitary, but squid are often found in shoals making them a commercially viable species for fishermen to catch. Squid and cuttlefish have 10 arms - 8 short and 2 long. Octopods have 8 arms; all of the same length. 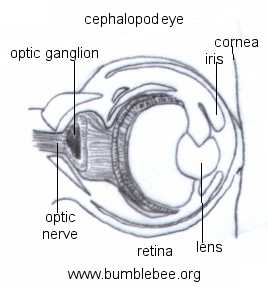 The eyes are large, sensitive and share many features with vertebrate eyes (see above), e.g. iris, cornea, lens focused by muscles and retina. The pupil is slit-shaped and the slit is aligned so that it is kept horizontal.

The vertebrate eye arises from the development of the brain, whereas the cephalopod eye arises from the development of the skin. The Colossal squid, Mesonychoteuthis hamiltoni has a huge eye measuring 60 cm in diameter. It is a deep sea squid, and the eye can glow in the dark, perhaps helping it catch its fast moving prey, such as the Patagonian toothfish. Few specimens have been caught, but one female from the Ross Sea weighed 150 kg, was 5.4 m long including her tenatcles, and 2.5 m excluding her tentacles.

The cephalopod chromatophore cell is a small sac filled with pigment and surrounded by muscle cells. These muscle cells are capable of stretching the pigment cell out so that it displays the colour. When the muscles cells are relaxed the pigment is more-or-less invisible. This type of cell allows for rapid colour changes.

Mating in the cephalopoda

Before the mating habits were understood females found with a hectocotylus embedded in them were thought to have been parasitised.

Many species breed just once then die.