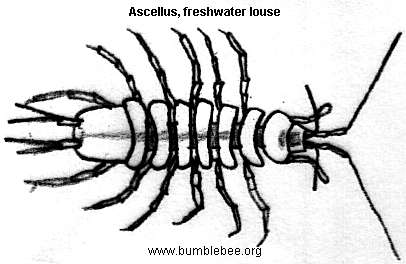 Above and below is the freshwater louse or hog louse, Ascellus sp. The drawing on the left shows the underside of a female with eggs (just one set of legs are drawn). it can grow to 2.5 cm long. It is grey-brown, but the colour varies. The female lays eggs in April or May, and carries them around in her marsupium (pouch). Even after hatching the young remain in the pouch for a while. 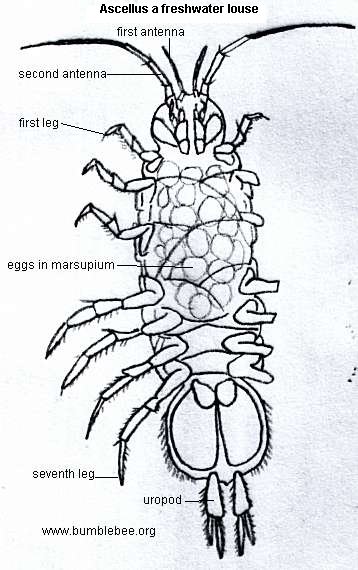 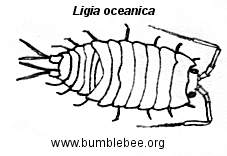 Above is Ligia oceanica, the Common sea slater. When fully grown it can reach 30 mm long making it the largest British woodlouse. Note its relatively long antennae. It is found only on sea shores, but is a fairly common sight around Britain and Ireland in crevices on rocky shores, emerging at night to graze on seaweed and algae. Sometimes it is found on the strand lines on beaches. Note that all 4 uropods are the same length. It is greenish-grey to a light grey-brown, and matches the background. It can change colour by expanding and contracting special melanin containing cells located just under its cuticle, and is used to study colour change in Crustacea. It has fairly large eyes consisting of numerous ocelli. When disturbed it can run quite quickly. It is a "popular" food on survival courses!

Cymotha exigua is a marine isopod. It enters the mouth of the Rose snapper fish, and grabs hold of the fish's tongue with its legs. Then if feeds on blood, mucus and the tongue itself. Eating away until the tongue is reduced to a stump, or more correctly, a handle for the isopod to hold on to. As the fish grows, so the isopod grows in proportion replacing the fish's tongue. The fish lives and feeds as normal, and looks like it has a normal tongue until you notice the eyes of the "tongue" staring back at you!