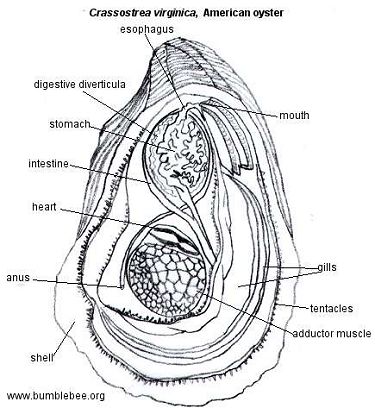 Above is the edible American east coast oyster, Crassostrea virginica. The lower valve is usually larger than the upper valve.

Below is an oyster shell where instead of forming a pearl round a piece of trapped grit a small fish has been trapped and preserved forever as a fish-shaped pearl. An oyster can produce as many as 50 million eggs a year. 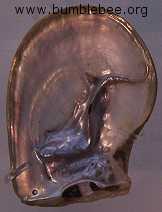 Below is the American thorny oyster, Spondylus americanus, which is found in the Caribbean, and the Atlantic coast from North Carolina down to Brazil between 9 and 45 m deep. It can reach 10 cm in diameter. The lower shell is flat and attached to the substrate. It tends to remain in the same place. In the past it was widely traded in South America as it was used for decoration.

Spondylus princeps, Pacific thorny oyster, also known as the Spiny oyster, Chrysanthemum shells, on the right is found from the Gulf of California down to Peru at around 50 m deep.

It cements the bottom half of its shell to a reef or other solid substrate, and sponges are attached to live and grow on the spiky top half od the shell. This provides camouflage. Fully grown individuals can reach up to 150 mm across. The outer colouring varies from pink through to red and orange.

In the past it has been used as offerings to gods, and as currency by native south Americans. In fact native indians call it "Food of the Gods". It was also used decoratively in jewellery - as it still is today.

Above is the Black-lipped pearl oyster, Pinctada margaritifera. It is native to the Indo-Pacific, but found in many other areas as it is raised commercially for pearls. In the wild it is found on tropical coral reefs down to 75 m deep. It produces back and grey "Black South Sea Pearls" of very high quality. Its common name comes from the inner black rim of the shell that you can see in the photograph on the right. Externally the shell colour varies from dark grey to brown and green, and often with white spots. Fully grown adults can be as large as 25 cm across.

Above is the Hammer shell or Blackhammer oyster, Malleus malleus, it is found in the Indo-Pacific on reefs and in sea grass attached to structures, or else free-living and partly buried in sediment at depths from 1.0 15 m. Sometimes it is found in large colonies.

Why the shell takes in such a strange shape is unknown. It can grow up to 20 cm long and is collected for food; the shell is also used to make lime, and cut up to be used in jewellery and decoration.