Above is the Fluted giant clam, or Scaled clam, Tridana squamosa. The fluted giant clam is found on sandy bottoms around coral reefs at 15 - 20 m deep in the Indo-Pacific, and has been introduced to Hawaii. The fluted edges are called scutes, and are used by crabs and other small invertebrates as shelter. It grows up to 40 cm across.It gets most of its food from a symbiotic relationship with a single celled algae that colonizes its mantle. The clam extends the mantle during the day for the algae to photosynthesise. This species is popular in large aquaria. It has been collected and traded for human consumption, but is now bred in captivity.

Below right is the giant clam, Tridacna gigas, the largest bivalve. Clams in the Tridacna genus usually have a symbiotic relationship with algae which live on the mantle tissue and provide an extra source of nutrition. 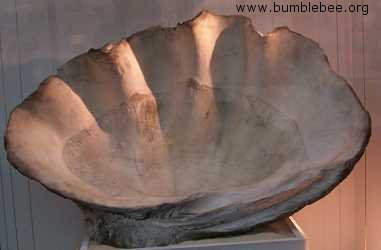 The Sand gaper clam, also known as the Soft shell clam is above. It is found buried in sand, gravel or mud near the shore or in estuaries, from 50 cm to 192 m deep around the U. K. and Irish coast. It is also found on the North American Atlantic coast where it is caught for food, and the Pacific coast where it is classed as an invasive species.

Its siphon is so long in order to reach the surface, that it cannot fit inside its shell (see the drawing on the right). A fully grown specimen can reach over 20 cm long. Its shell is thin and easily damaged giving it one of its common names. Its main predators are humans, sea otters, crabs and sea gulls.

The Quahog (see the photograph above) is native to the east coast of North America from Prince Edward Island down the the Yucatan Peninsula, where it burrows into mud and sand in waters up to 10 m deep. More recently the quahog has been introduced to parts of northern Europe.

Quahog reproduction is sexual and external. Sexual maturity is reached after one year. At first the sexual ratio is strong skewed towards males, with around 98% of juveniles being male. As the population ages many of these males change to females, so at reproductive maturity there are roughly equal numbers of each sex. Like other clams the Quahog is a filter feeder. Its predators include sea stars, whelks, crabs, snails, bird and humans. The entire quahog body is edible, not just the adductor muscle. Most commercially caught quahogs are between 4 and 8 years old.

It was famously used by native North Americans to make their currency, which they called wampum. The whole shell was used for this, but the purple parts were the most valuable. The shell was cut into small pieces, and these pieces were made into beads, then treaded on to necklaces, belts and clothes.

The clam esteemed by gourmets highly
Is said to live the life of Riley;
When you are lolling on a Piazza
It's what you are as happy as a.
Ogden Nash