Mites and ticks are found everywhere, and have an extensive range of feeding habits, e. g. as predators, scavengers, detrivores, fungivores and omnivores. They are also found in a wide range of habitats - in soil, on plants, in fresh and salt water, on and in animals including humans! They are medically and economically very important animals as they can transmit or cause disease in both plants and animals, e.g., scabies and mange. In fact ticks can transmit more disease organisms than any other group of arthropods.

Many are only a few millimetres long, but they can range in size from the smallest mite, Eriophyes ribis at 0.1 mm to the largest tick, Amblyomma clypeolatum at 30 mm after a full feed. There are over 48,000 species described, including 326 British freshwater species, but it is believed that just 5 - 10% of the mites have been identified so far. The fossil record stretches back as far as the Devonian. A square metre of temperate forest soil can contain 250,000 mites!

Most have four pairs of legs, but larvae have only three pairs. Most mites do not have eyes. This page deals with mites, for ticks go to this page.

Follicle mites are highly specialised and live in the hair follicles and sebaceous glands of mammals including including you. The body is soft and long, and the legs have become attachment organs - see below.

Demodex folliculorum is commonly found in man. They are mainly nocturnal. During the day they hide deep within your hair follicle well out of harm's way, but when you are asleep D. folliculorum mites become active. They roam around your eyelashes and eyebrows. They feast on the waxy sebum secreted from your pores, they mate, and the females lay her eggs in the crevices of your skin and pores. Feeling queasy? It gets worse. Demodex has what is called a blind gut, this means that although they eat they do not excrete, so that when they die they are quite literally full of s***. And they die where they live - on you. After a while decay sets in, their bodies burst and the contents are spread on you - mainly in your pores. Sweet dreams!

D. folliculorum is not believed to cause any disease, it is associated with certain skin disorders, e.g. black-heads, acne and impetigo. The female is shorter than the male, and has a rounder body.

Demodex canis (above) is found in dogs. The life cycle is usually completed in around two weeks. After mating the female lays eggs in a sebaceous gland. Then she climbs to the top of the follicle and dies. This blocks the entrance to the hair follicle and so stops another female entering to lay eggs.

In humans Sarcoptes scabei (above and below) causes scabies, and in dogs and other animals it causes mange.

Lifecycle. The adult female mite is 0.33 - 0.45 mm, and the male 0.23 mm. She burrows into the skin using her mouthparts and cutting surfaces on her front legs.

The 6- legged larvae crawl out of the burrows to feed around the hair follicles. Then they moult 2 or 3 times and mate, and the life cycle starts again.

The whole life cycle takes around two weeks to complete. The female can lay up to 25 eggs every 2 or 3 days.

They can survive for several days off the host. This means that it is possible to be infected without having direct contact with an infected human or animal, e. g. from a mattress where an infected human has slept, believe me, I know!

The mite is almost transparent. 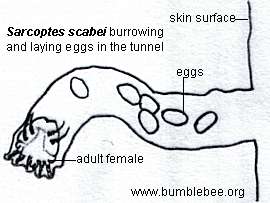 Secretions from the body of the mite cause itching, and the scratches caused by the itching can become infected.

Getting rid of scabies is fairly easy using modern medicines and following the instructions carefully.

Diagnosing scabies infections is more difficult, as it requires the inspection of a skin scrape through a microscope. Only the presence of a mite can prove infection. However if one child has scabies and the others are itching, infection can usually be assumed.

An old method of locating the exact infection sites was to put a drop of ink on the skin, then rub it off. The ink will rub fairly cleanly off undamaged skin, but will occupy the burrows of the mite and so show up as dark patches.

Scabies is most commonly found on the arms and legs of humans. 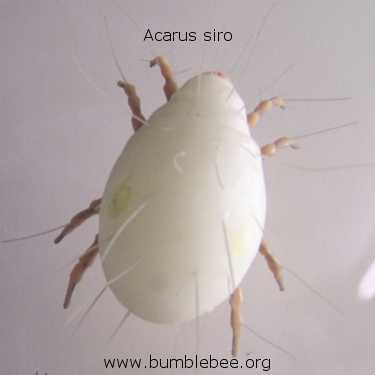 Its life cycle is similar to the House mite, and can take just 9 - 11 days from egg to adult under good conditions. It is found in any type of flour or seeds, and is a serious pest of stored food including flour, cheese, and also paper, tobacco and birds nests. The female can lay 500 - 800 eggs in her life time, at a rate of 20 - 30 per day.

To test if flour is infected just spread some on a flat surface indoors and leave for 20 - 30 minutes. When you return if the flour is infected the surface will have become uneven due to the movement of the mites.

In large numbers they can cause dermatitis if handled, and the flour mite is one of the many mites that can cause asthma.

Below is Cheyletus sp. a hunting mite. This mite hunts down and kills pest mites such as dust mites and flour mites. It is often found on bedroom floors, and even in bird's nests. It can cause allergies in some people. 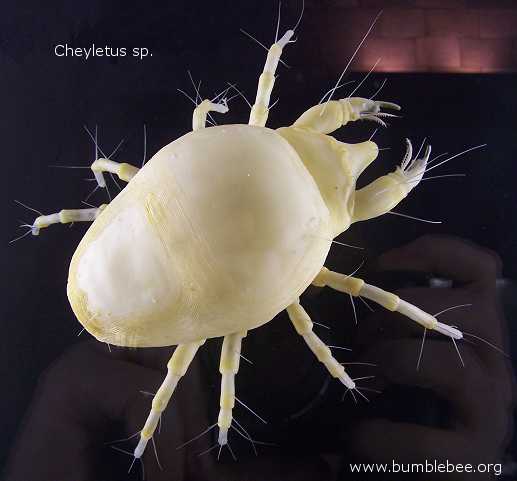 Chelytus eruditus feeds on other mites, including Acarus siro, above, and their eggs. The males are rarely seen, and so females are usually parthenogenic. The female lays her eggs in a small pile of 20 - 30 and broods them. Even after the larvae have hatched she still stays nearby. On hatching, the larvae, as is common in mites, have just 6 legs. It is only after they have moulted that they have 8 legs. The whole lifecycle takes 7 or 8 weeks.

Varroa destructor is a mite that parasitizes honey bees leading to loss of honey and wax, as well as poor pollination of crops.

It was first identified in 1951 in Singapore, and has spread worldwide because of the movement of infected colonies, and the importation of infected queens. Beekeepers aim to "control" Varroa as they cannot eradicate it. The mite feeds on the haemolymph of the larva, then when the bee hatches out as an adult it is wingless, so cannot go out and forage for food.