The oligochaetes are mainly terrestrial or freshwater animals. There are over 3,100 species worldwide and 26 native species in Great Britain. Species range in length from less than 1 mm to 4 m long and 2 cm in diameter in the case of the giant Gippsland earthworm (see the main Oligochaete page).

As their name suggests Oligochaetes have fewer chaetae than Polychaetes; usually they have four pairs of chaetae on each segment.

The chaetae are used in burrowing as they provide anchor points. Many people find it hard to believe that they have hairs or chaetae, but it is the chaetae anchoring it in its burrow that makes it so hard for birds to pull an earthworm up. If you put an earthworm on a piece of paper you can hear the scratches of the chaetae as the worm moves. Do remember to handle the worm gently and put it back where you found it after it has entertained and educated you.

Oligochaetes have no respiratory organs. Gas exchange (breathing) takes place over the entire surface of the body. So if the worm's skin becomes dry it starts to suffocate.

As in polychaetes each segment has muscles, chaetae, excretory organs and nerve branches.

Mature Oligochaetes have a clitellum which is always located closer to the head end; this is an unsegmented band or saddle located about a third of the way back from the head, see the drawings on the terrestrial species page.

Tubifex , sludge worms(above and below), is the bright red worms sold in tight bundles for feeding freshwater aquarium fish, it is a freshwater oligochaete. The bright red colour is the blood vessels, the worm itself is transparent.

In the wild it lives at the bottom of rivers and streams in thick mud. It can survive in water with low oxygen content and is often found downstream of sewage works where it can reach densities of 8000 per square metre.

It lives in a burrow with its tail out in the water to absorb what little oxygen there is in the passing water. The more the tail is sticking out the more anoxic the water is. They are usually around 10 - 75 mm long.

Its eggs (above) are laid in capsules, see above. Tubifex cocoons are 1.6 x 0.8 mm. When conditions are good a cocoon can be formed every 3 or 4 days. 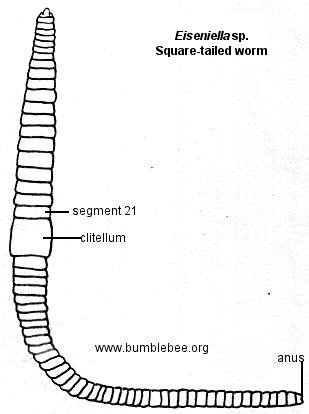 Above is Eiseniella sp., the square-tailed worm. It is a freshwater worm which looks like a small earthworm. They are pink in colour and 4 - 8.5 cm long. The clitellum is located towards the middle of the worm. It is found under stones in the beds of mountain streams or wet stream sides, among mosses, and also in the mud and roots at the edges of lakes.