The Polychaetes are mainly marine and take their name from the numerous chaetae/setae (bristles or hairs) they bear on paddle-like extensions from the body wall called parapodia (see the drawing of Nereis virens below). There are over 10,000 species ranging in size from 1 mm - 3 m. In some mud flats 1 square metre of mud can contain thousands of individuals. Common names are lugworm, blood worm, ragworm and tubeworm.

The chaetae are arranged in paired groups on each parapodia. These are paired appendages, one on either side of almost every segment, they are the fluffy-looking bits on the lugwom Arenicola marina above and Neanthes virens, below. Parapodia are used in locomotion and respiration.

There are a variety of body shapes. Some are sedentary tube or burrow dwelling particle, detritus or plankton feeders using ciliated tentacles to intercept food, others may lead a free-moving life and are usually predatory and have an eversible pharynx with strong jaws and teeth, see Neris virens below left. Usually they have a well-defined head and no clitellum (see Oligochaetes).

Arenicola sp. (above) are often dug up for bait by fishermen who find them by searching for worm casts on the surface. The worm comes to the surface and defecates every 40 minutes or so, then returns to its mucous-lined burrow.

In the image left you can see the worm's head is located towards the "blind" end of its burrow. It continually eats the sand in front of it, and this action forms a small depression on the surface.

When the tide is in small prey items and detritus fall into this depression and steadily move towards the worm's mouth. Any organic matter between or on the sand grains is digested and the waste grains secreted on to the surface. 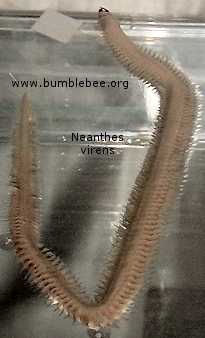 Neanthes virens, (also known as Alitta virens and Neris virens) above and below is also known as the king ragworm, sandworm, and clamworm. It is omnivorous and hunts for food in the sand and mud and can grow up to 120 cm long. When fully grown it will have more than 200 segments. It is found in the North Atlantic and is sometimes harvested for fish bait. It is found in shallow, brackish waters in a U-shaped burrow (see the diagram at the top of the page) located between the high and low water marks.

The King ragworm burrows in the sand and mud where it feeds on smaller worms, crustaceans and molluscs, snaring them by shooting partially out of its burrow, grabbing the prey with its two teeth (see below) and dragging the prey back down inside to be eaten. When particularly hungry the ragworm will leave its burrow to scavenge in the detritus layers on the seabed. This ragworm spawns in spring. 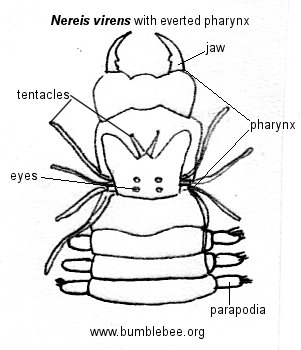 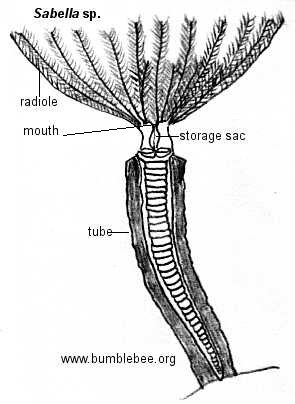 Sabella sp. above, commonly known as fan worms, secrete a parchment-like tube made of sand grains mixed with mucus. The fan can be contracted and drawn into the tube with great rapidity for protection. Sometimes a shadow or vibration is all that is required to cause the worm to withdraw its fan.

Cilia on the radioles direct small food particles down the grooved radiole to the mouth. Sand grains are also directed towards the mouth.

Grains of a suitable size are passed into storage sacs until they are needed for tube building. The walls of the storage sacs produce the mucus which is mixed with the grains of sand used in building the tube. This mixture is extruded in a slimy rope to add to the top of the tube.

Lagisca flocculosa, above, is a scale worm. Some scale worms are luminescent. They get their name from the plate-like scales on the dorsal surface of the body.

Pomatoceros triqueter, the keel worm above and below, whose calcareous tubes are above is found in the NE Atlantic and the Mediterranean on hard surfaces.

The tubes are up to 1 cm in diameter and 12 cm long. There is usually a visible keel running along the tube - which gives the worm its common name.

The worm emerges into the open and feeds with its tentacles which are often red.