The Economic importance of bumblebees

Bees are responsible for pollinating plants that provide much of our food.

In North America it is believed that 30%* of food for human consumption originates from plants pollinated by bees. And in the US alone insect pollinated crops were worth $20 billion at 2000 prices.

84% of European crop species require insect pollination. In the U. K. honey bees are responsible for pollinating around a third of crops that require animal pollination. The other 2/3 are pollinated by bumblebees, solitary bees and hoverflies. As for wild flowers, well honey bees pollinate just 3% of these, the rest are pollinated by our native pollinators - bumblebees, solitary bees, hoverflies, and hundreds of other insects that largely go unnoticed and unstudied.

Honeybees are generally thought of as the most common pollinator, and they are the most widely studied, but bumblebees are the chief pollinators of red clover, alfalfa, field beans, peas, runner beans, tomatoes and in some areas cotton, raspberries, apple, plum blossom, oilseed rape, sunflowers, strawberries, currants and brambles.

In the Origin of Species, 1859, by Charles Darwin. Darwin reported the results of an experiment he carried out. 100 heads of Red clover (Trifolium pratense) which had been protected so that they could not be visited by bees produced no seeds. 100 heads of Red clover that had been left so that bees could visit and pollinate them produced 2,700 seeds. Clover is important as a seed crop, food for cows and other grass feeding animals, and also its roots sequester nitrogen in nodules making it a natural fertiliser.

In south China, because of the almost complete disappearance of bees in some places, the pear and apple crop now have to be pollinated by hand with a tiny paintbrush.

In Norwegian orchards honeybee pollination is usually limited by low temperatures, so bumblebees are the chief pollinators there, and in other Scandinavian countries bumblebees will forage 24 hours a day in the long days of summer. Also bumblebees will pollinate flowers that do not produce nectar, whereas honeybees will not. Just look at the photograph below. No other animal can pollinate "difficult" flowers like antirrhinum except big, fat, hairy bumblebees. They have to learn how to get at the nectar located at the bottom of the gullet-shaped flower. And even once they know where it is they have to push their way between the petals to get at it. On the way down to the nectar they pollinate the flower and pick up more pollen. This bumblebee is still quite early in her foraging trip as we can see from the small load of pollen she has loaded into her pollen basket.

Bumblebees are built to pollinate 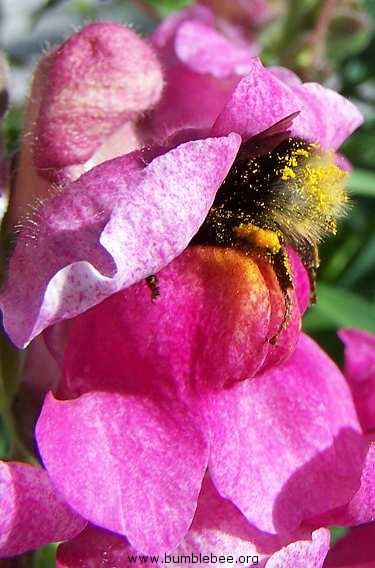 In New Zealand bumblebees were imported (they have no native bumblebees) to pollinate the forage crop clover (Trifolium pratense) as the corolla is too long for honeybees, so they cannot act as pollinators. Bumblebees are such good pollinators of these crops for three reasons: 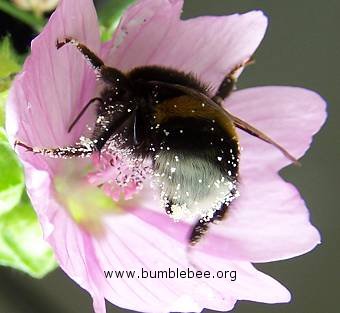 In the 1980s commercial production of bumblebee colonies for glasshouse pollination was started. A honeybee hive would be too large, and also honey bees are unable to perform the "buzz pollination" required by tomatoes. The anthers of tomatoes will only release their pollen when they are vibrated at around 400 Hz. The bumblebees do this by grabbing hold of the anthers and vibrating their flight muscles without moving their wings. Previously an artificial buzzer was carried around by hand to pollinate these plants when they were grown in glass houses. Within 3 years of Bombus terrestris being reared commercially for pollination use in glasshouses 95% of tomatoes grown in Holland had been pollinated by bumblebees. So now almost every European tomato is the result of a vibratory embrace of a bumblebee!

Bumblebees are also used to pollinate aubergines and peppers, cabbage and carrot for seeds, kiwi fruits, strawberries, courgettes, aubergines, sweet peppers, cranberries, blueberries and tomatoes for fruit. About a quarter of a million colonies are reared artificially every year (1997), and they are used in over thirty different countries on over twenty-five crops. So bumblebees are of great economic importance, and with the increase of glasshouse cultivation, and the spread of the mite, Varroa jacobsoni and colony collapse disorder, causing a decline in honeybee populations, their importance can only increase.

Crops pollinated by bumblebees (some of the crops are pollinated for seed).

If you have found this page useful/interesting, perhaps you would like to donate something towards it upkeep. Just click on the link below to buy me a coffee.