As with all insects the bumblebee has what is called an exoskeleton, i.e. its skeleton is on the outside and is made up of hard plates of chitin. Chitin is a nitrogenous polysaccharide insoluble in water, alcohol, dilute acids and digestive juices. So having an exoskeleton means that once a bumblebee has hatched out of its cocoon as an adult it cannot get any bigger. The muscles are attached to the inside of the plates. Humans have an endoskeleton, i.e. our skeleton is on the inside of our body and is made of bone. The muscles are attached to the bone, and because the skeleton is inside we can grow in size.

The bumblebee's body has many adaptations to enable her to gather nectar and pollen more efficiently from flowers, to operate in low temperatures that stop other pollinators working, and to defend herself and her nest mates.

Bumblebees would die without flowers and many flowers would be unable to breed without bumblebees. Like most insects the bumblebee body can be divided into three main areas: 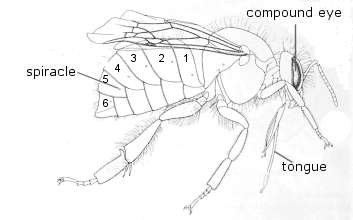 Bumblebees have two pairs of wings, though it looks like they have just one pair as the wings operate together, unlike those of dragonflies, and are held together by a series of hooks. For more details on wings, wing beat, flight speed etc go to the wings page.

The abdomen is covered with dorsal tergites and ventral sternites numbered 1 - 6, see the drawing on the above. Wax (see below) is secreted between these plates. As it oozes out it looks a little like dandruff!

The part where the wings join the thorax is called the tegula (plural tegulae) - see the drawing near the top of the page. When marking bumblebee you must be very careful to keep the tegula clear.

The antenna (see below) or feelers of the bumblebee are used rather like humans use their noses, and are also used for touching. Again there are more details on the antenna page. As in all the social Hymenoptera (bees, wasps and ants) the antennae are "elbowed", I. e. they have one long bit called the scape followed by many jointed segments called the flagellum, this can be easily seen in the photograph below.

Like most adult insects the bumblebee has three pairs of legs. Queen and worker bumblebee legs are specialised for gathering pollen, and there is a lot more about legs on the leg page.

Like many adult insects the bumblebee has two compound eyes and three "primitive" eyes called ocelli (see the photographs on the above and below). To find out more about eyes and bumblebee vision go to the eye page.

The bumblebee breathes through spiracles, these are simply paired holes down the side of its body, see the drawing above. The air is drawn in as the insect moves. The spiracles are attached to tubes called trachea, the bumblebee also has air sacs.

As far as the external body goes queens and females are more or less the same, although in some species there is a big size difference, and there may be some difference in hair colouring. But as this section is not concerned with species we will lump queens and workers (females) together. So the differences between males and females are: 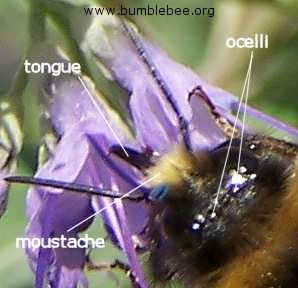 The bumblebee tongue is specialised to suck up nectar (see the photograph above). At rest or when flying the tongue is kept inside a sheath and folded under the head and thorax.

Wax is secreted by glands in the abdomen and exudes between the chitinous plates of the abdomen, and looks a little like flakes of dandruff. It is scraped off by the legs and moulded into whatever is needed. The wax is used to construct honey pots, as a covering for the eggs, as a lining inside some used cocoons to make them hold nectar/honey, and sometimes as a covering for the whole nest.

Wax is secreted by the queen when she starts the nest, and by workers on the second day of adulthood. The secretions decline after a week. It is during this time that most workers spend most of their time in the nest performing household tasks. Only later do they leave the nest for the dangerous job of foraging.

A bumblebee does not have ears, and it is not known whether or how a bumblebee can hear sound waves passing through the air, however she can feel the vibrations of sounds through wood and other materials.

The heart, like that in most other insects, runs down the entire length of the body.

The fat body is a nutritional store. Before hibernation queens eat as much as they can to enlarge their fat body. The fat in the cells is used up during hibernation. The fat body is largest in queens, smaller in workers, and doesn't exist in males.

The blood (hemolymph), is not carried in veins and arteries as ours is, but just sloshes around. The body organs, heart, muscles, etc. sit in a pool of blood. The heart does pulse blood through its long tube, though, so there is a circulation of sorts.

In fertilised queens the ovaries are activated, and when the queen lays an egg it passes along the oviduct to the vagina. In the vagina there is a container called the spermatheca. This is where the queen stored sperm from her mating the previous year. Before she lays the egg she will decide whether to use sperm from the spermatheca to fertilise it or not. Non-fertilised eggs grow into male bumblebees, and only fertilised eggs grow into females and queens.

As in all animals hormones play a big role in the growth, development and behaviour of the bumblebee. The hormones that stimulate the development of the ovaries are suppressed in the other female worker bees while the queen remains dominant.

Salivary glands in the head secrete saliva which is mixed with the nectar and pollen. Saliva is also mixed into the nest materials to soften them.