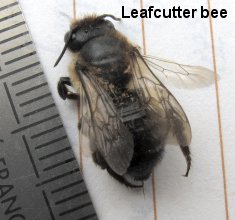 These are the bees that cut holes and semi-circles out of rose leaves, and other leaves, to line the cells in their nest. The holes are around 10 - 15 mm wide and take the bee just a few seconds to cut. Lilacs and roses provide their favourite material. Many species are in the Megachile genus which holds 1500 species world wide and 7 in the British Isles, most of which are leafcutters. Some species are important crop pollinators, e. g. Megachile rotundifolia (Alfalfa leafcutter). There is a curious sub genus called the Xanthosaurus. The males in this sub genus have enlarged tarsi on their front legs. When mating they use these enlargements to cover the eyes of the female like a blindfold, but we do not know why!

Leafcutter bees nest in a variety of places, in the ground, under stones, in cavities in wood and stone, pithy plant stems, and in dead wood. In some countries, the US, France and New Zealand these bees are raised to pollinate crops.

Leaf cutters do not have pollen baskets on their legs as bumblebees and honeybees do, but carry the pollen in hairs on the underside of the body. This can be seen in the photograph below. 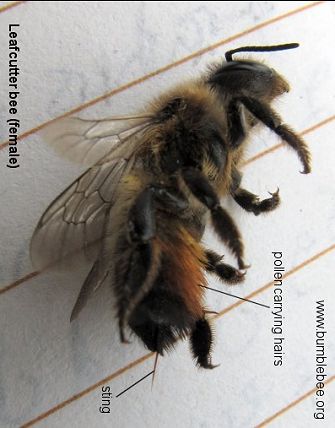 The female bee places a supply of honey and pollen in the cell; lays an egg on this, then seals the cell and builds the next one in the cylindrical hollow. The cells look like stubby cigars - see above.

Once she has sealed the last cell the female bee goes off and dies. When the new adult bees are ready to emerge they eat their way through the leaf parts. The last egg laid is the first to hatch. The last eggs laid are usually males, and they hang around on nearby flowers waiting for the females to emerge.

Megachile centucularis, also known as the upholsterer bee, the patchwork leaf cutter and the rose leaf cutter above, and is found right across Eurasia and North America. In the UK they fly from June to September. Their body length ranges from 10 - 12 mm, fore wing length 7 - 8.5 mm.

The female uses rose, birch, ash and many other leaves as long as they have a serrated edge. The tunnel diameter is 7 -8 mm, and 9 - 12 pieces of leaf are needed for each cell. The cells are thimble shaped inside, and each is sealed with 4 - 12 circular pieces of leaf. She builds her nest in dead wood, bee hotels, wall cavities, hollow twigs, and sometimes even in the soil.

There are usually 6 - 10 cells per nest. Each cell takes the bee around 6 - 8 hours of work to construct, provision with honey and pollen and to lay an egg. She does not have pollen baskets but carries pollen back to the nest in the bright orange brushes on the underside of her abdomen (see the photograph above).

At night she rests in the nest entrance facing outwards and will bite anything that tries to enter. The eggs hatch in 12 - 16 days, feed on the pollen their mother has left for them, then spin their cocoon 17 -18 days later. Faecal pellets help stick the outer layer of the cocoon to the inner leaf layer of the cell.

In Japan the leaf cutter, Osmia cornifrons, is used in orchards to pollinate the apple crop, and has been imported into the U. S. A. for the same purpose along with the native, Osmia lignaria.

These bees are in the Halictidae family. There are 3500 species world wide, 62 in the U. K., most are small - medium sized (some species are just 4 mm long), have short tongues, and as with all bees, feed on pollen and nectar, however they get their common name as many of the tropical species have a habit of licking the perspiration off human skin. Most species are solitary, but there are a few social, communal and semi-social nesting species. Many have metallic colouring. The British species collect pollen the the long hairs on their hind legs (see the photograph below).

The female digs a tunnel, and the cells are located off the main tunnel. The main tunnel is always deeper than the deepest cell. It is thought that this might act as a drain. The cells are lined with a glandular secretion which gives them a waxy or varnished finish, and is waterproof.

Like bumblebees the females mate before going into hibernation for the winter. This means that on emerging in spring they can get straight to the important business of making a nest. 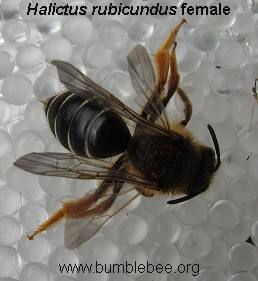 In the Halictus genus there are 6 British species, and of these six two are found only in the Channel Islands. Halictus rubicundus above and below is common throughout Eurasia and North America. Adult females are around 12 mm long, though in Britain they are rarely over 10 mm long, with a forewing length of 7 - 8 mm. Note that the female above has her sting extended.

A Halictus rubicundus female transports pollen back to the nest in the orange or yellow hairs on her legs - see the photograph below showing the hairy back legs. In the U. K. females fly from March - October, and males from June - October. Favourite flowers include thistles, knapweed, ragwort, hogweed and wild parsnip, also the blossom of fruit trees. The nest is usually found dug into light soils, and in favourable areas there can be a large number of nests close together. This is more common in the south. 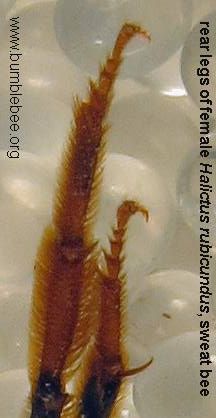 Coryanthes sp., the south American bucket orchid tree epiphyte opens its flowers in the early morning and drips fluid from two glands into its bucket. The fluid gives off a scent attractive to male bees.

The male bees arrive and rub off some waxy substance from the flower. Many male bees are attracted and there is some fighting and pushing, also the aromatic fluid seems to have a slightly intoxicating effect. The upshot of the crowding, excitement and intoxication is that a bee will eventually fall into the bucket of fluid.

There is only one way out of the slippery bucket and that is through an escape tunnel. At the exit the tunnel closes, gripping the body of the male bee while gluing two pollen sacs to its back. The bee is trapped for ten minutes, just the right amount of time it takes for the glue to dry.

When other bees fall into the bucket they are allowed to pass through the tunnel unhindered, but if one is carrying pollen sacs on his back the sacs will be pulled off. This pollination is species specific, i.e. that plant can only be pollinated by a particular species of bee. This is a precarious position to be in if something happens to the pollinator.