A cuckoo bumblebee, like the bird it is named after, lays its eggs in another bumblebee’s nest and leaves the workers of that nest to rear the young. Of course the eggs the cuckoo lays are either females or males (there are no queens), and the cuckoo females emerge from hibernation in late spring or early summer, much later than ordinary bumblebee queens. So by the time the cuckoo females have emerged the bumblebee queens will have already established their nests and have some workers.

The cuckoo differs physically from an ordinary queen bumblebee in that she has no pollen basket on her rear legs, does not exude wax from between her abdominal segments, is slightly less hairy than ordinary bumblebees, and all species have shortish tongues. Cuckoos have a much harder exoskeleton than normal bumblebees, and because no wax is exuded there are no weak points between the abdominal segments, so if there is a fight between a cuckoo and another worker or queen it is almost impossible for the queen or worker to force her sting into the cuckoo body. Cuckoos also tend to have a more pointed abdomen, and because they are less hairy the tip of the abdomen is often visible. Apart from that cuckoo bumblebees usually have the same pattern of hair colour as the bumblebees' nests they lay in.

It is thought that the cuckoo females locate an established nest by smell. She may go right in and sting the existing queen to death then lay eggs, or she may sneak in the nest and hide for a few days until she smells the same as the nest, then lay her eggs. Whatever method she uses it spells the beginning of the end for the nest because the cuckoo larva consume resources but contribute nothing to the nest.

It has been decided to rename the genus of cuckoo bumblebees from Psithyrus to Bombus, so you will find both names in text books.

Notes: Also known as Bombus flavidus
Range: Alaska and Canada south to North Carolina, Tennessee, Colorado, California, usually found in or near forested areas and on the Great Plains. Uncommon. Favourite flowers include asters, thistles, potentilla, clovers, goldenrods, dandelions and lupins. Parasite of Bombus perplexus, B. rufocinctus.
Body lengths in mm, female 17 - 18, male 11 - 15. Hair is medium/long length and uneven. Short tongue. Females seen from May, males from June in the east and slightly later in the west. 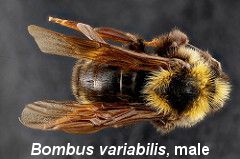 Range: Canada south to California, Arizona, New Mexico, Nebraska, New York, Alaska. Rare in the eastern part of its range, but common in the west. Favourite flowers include asters, goldenrods, clovers, Vaccinium, thistles and dandelions.
Body length in mm. female 16 - 20, male 11 - 16. Hair medium length. Short tongue. Females seen from April in the west and May in the east, males from July.
Cuckoo of Bombus appositus, B. fervidus, B. flavifrons, B. nevadaensis, B. ternarius, B pensylvanicus, B. californicus and occasionally B. occidantalis, B. rufocintus and B. terricola.

Range: Alaska south to California, Utah, Colorado.
A fairly common species. Favourite flowers include asters, rudbeckia, goldenrod, lupins, centaurea, thistles and clovers. Body lengths in mm female 18 - 23, male 13 - 16. Hair is long and uneven. Females emerge in May and males in June. Parasite of Bombus terricola, B. rufocinctus, B. fervidus, B. nevadaensis, B. occidentalis, B. californicus, and B. appositus. 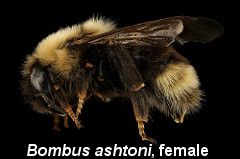 Bombus bohemicus and B. ashtoni are thought by many to be the same species. Favourite flowers include Vaccinium, clovers, goldenrods.
Range: In the US, East, Mid-west and Alaska, also Canada. Found at high elevations in forests. Also native to Europe.
Body lengths in mm, female 17 - 19, male 11 - 17. Females seen from April, males from June.
Parasite of Bombus terricola, B. affinis and possibly B. occidentalis. 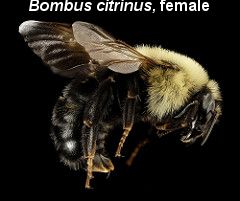 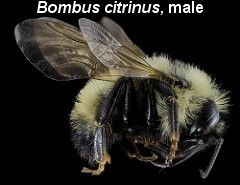 A common species. Favourite flowers include milkweeds, vervains, Eupatorium, clovers, goldenrods. Is a parasite of Bombus impatiens,and B. vagans. Females seen from April, males from June.