I have quoted the tongue lengths as this can determine which flowers the bumblebee will gather nectar from, for more see the tongue page. I have also quoted body lengths in millimetres. This information comes from a number sources, and really should be used as a rough guide. Early workers can be much smaller than later workers, also the methods used for measuring vary - some sources measure dead bees and others live bees.

Range: Southern Canada from Nova Scotia to Alberta, Northern USA from Maine to New Jersey west to North Dakota and South Dakota. An uncommon species found in and around woodlands. Favourite flowers include vetches, thistles, asters, and comfrey.
Long-tongued species, hair length medium and even. Body lengths in mm, queen 18 - 22, worker 13 - 15, male 14 - 16.
Nests underground. Males gather outside the nest entrance to await the emergence of young queens for mating. Queens are seen from May, workers from June, and males from July. 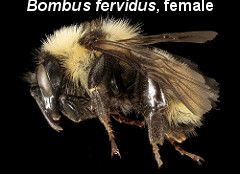 Range: Quebec and New Brunswick, Maryland, Virginia, West Virginia, south to Georgia, west to British Columbia, Washington, Oregon, California and Mexico. This species is common in the west, but declining in the east.

Range: British Columbia east to Saskatchewan, south to New Mexico, Wyoming, Arizona and California. It is found in open meadows and is fairly common. Favourite flowers include thistles, asters, delphiniums, clovers, geraniums, and penstemon.
This bumblebee has a long face, long tongue, and its hair is short - medium length and even. Body lengths in mm, queen 20 - 24, worker 11 - 18, male 10 - 16. Queens and workers are seen from mid May, and males from July. Males gather around the nest entrance to mate with newly emerged queens. It nests underground and on the surface. 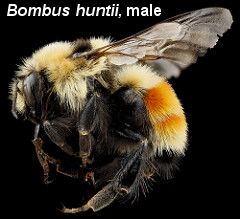 Range: Southern British Columbia to California. Found from sea level up to 2700 m, in open grassy prairies, mountain meadows, and northern forests. Common. Favourite flowers include, Epilobium, vetches, clovers, geranium, thistles, sunflowers, goldenrod, dandelion, penstemon.
The queen and workers have a long tongue. The hair length is medium and uneven. Body lengths in mm, queen 16 - 18, worker 10 - 13, male 10 - 14. Queens are seen from late April, workers from mid May, and males from late May.
Nests mainly underground, but there are reports of surface nests.