I have quoted the tongue lengths as this can determine which flowers the bumblebee will gather nectar from, for more see the tongue page. I have also quoted body lengths in millimetres. This information comes from a number sources, and really should be used as a rough guide. Early workers can be much smaller than later workers, also the methods used for measuring vary - some sources use dead bees and others live bees.

Range: Nova Scotia, New Brunswick, Quebec, west to British Columbia, south to California, Arizona, Wyoming, New Mexico, Kansas, Minnesota, Illinois, Michigan, New York, Vermont, Maine, Mexico. It is generally found foraging close to woods, parks and gardens. Favourite flowers include, clovers, thistles, cosmos, rudbekia, dandelions, goldenrod, asters. Nest are found on the surface or above ground. Queens are seen from May, Workers from June and males from July.
A fairly common species. This is a short-tongued species, with a variable hair colour as you can see from the drawings above. The hair is short and even. Body lengths in mm, queen 17 - 18, worker 9 - 13, male 11 - 15. 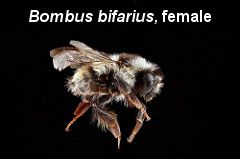